﻿Under Moscow via Normandy summit 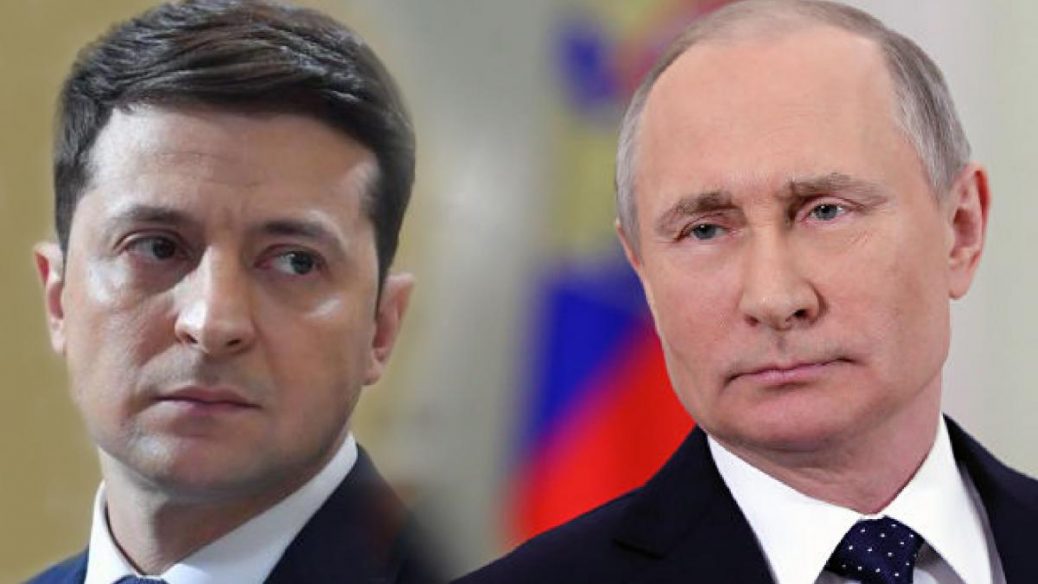 If you listen to what Ukrainian high-ranking officials say about Normandy summit and Minsk aggrements, it seems that there was no presidential election a short time ago.

Even with the change of the Bankova owner’s name, the narrative of the government regarding the war has not changed substantially.

They keep telling us that 50 shades of “Minsk” is the only possible way to end the Russian aggression. However, logic says that we should not rely on Russia’s commitment to peace at least because Russia is an empire. And it is vital for any empire to move forward on the map, otherwise it will fall apart.

So instead of false hopes for a cheap peace, we should rethink everything that has happened in the past six years and try to predict possible scenarios for the future course of events.

With its aggression against Ukraine, it achieved a minimal but sufficient result. However, a “blitzkrieg” in eastern Ukraine, planned by Putin, failed.

Our state has endured; we did not lose Kharkiv, Odesa, and Mariupol. The empire annexed Crimea, seized the economic district of Donbas, which undermined the Ukrainian economy.

Russia has shifted much of its burden of occupation onto the Ukrainians’ backs. It collects all taxes and fees paid in non-government controlled areas, though not only Russia but also Ukraine provides for the locals by paying pensions and other social benefits.

Having achieved initial success, Russia, like any unpunished evil, creeps on.

The aggressor wants to become a peacemaker

Russia has always tried to shun responsibility for what it has done in order to continue being an active participant in international relations and to avoid the risk of serious sanctions for aggression.

It forces a victim to sit on one side of the negotiating table, its proxies on the other, and takes a seat in the middle as a “peacemaker.”

We are at this stage now. Of course, we can keep saying that we do not negotiate with collaborators, but the reality is different.

Its next task is to legalize its adherents and firmly tie the victim’s hands. To do this, Russia needs to consolidate the existence of puppet formations in the victim’s constitution and legalize the power of its proxies via elections. The aggressor’s ultimate wish is to get a means to completely destroy Ukrainian independence.

With legalization, it will have an impact on our national policies and huge levers to destabilize the country from within.

“Minsk” is not peace, but a transfer of war from the front to the rear

Reintegration under Russian conditions will definitely result in destabilization.

Firstly, active strata of society will never accept such conditions, and the government will lose people’s trust. Such heady brew always poses a threat of a new revolution, which an already weak state organism is unlikely to withstand.

Secondly, some of the people who have been at war will never return from it mentally. On one side, there will be our veterans with a keen sense of justice and a desire to punish those responsible for the death of their brothers, and on the other – those who had Ukrainian citizenship but fought against Ukraine.

Reintegration will not return Ukraine’s authority to Donetsk and Luhansk.

Under the Minsk conditions, there will be no such a state as Ukraine in the “reintegrated territories”. Because the government will not have its own bodies there to implement its policy and will not be able to enforce its implementation. Because yesterday’s collaborators will become “people’s” policemen, prosecutors and judges.

At best, very few state flags will be hanging over Donetsk and Luhansk Regional State Administrations, and I think this where the state’s presence will finishes up.

It is unlikely that many pro-Ukrainian IDPs will return to the ORDLO. But it is very likely that any criminal will escape from justice there.

And we are the ones who have to pay for the special status because s “Minsk” obliges us to provide socio-economic support for ORDLO development.

In addition, granting special status to one part of the country will trigger a chain reaction.

The granting of a broader range of powers to one part of the country will inevitably activate separatist movements throughout the country. And let there be no doubt in your mind that every centrifugal movement will always find generous financial, information and any other support from Russia.

A peaceful trap from which we cannot escape

So “Minsk” is nothing but a scenario of destruction of Ukraine by Russia with the help of Ukrainians themselves. The age-old principle of divide and conquer retains its relevance today.

Let’s imagine that Ukraine will try to break this vicious cycle – to forcibly establish order in the ORDLO and to cancel the special status by changing the constitution. Have you imagined? Now, see the Minsk agreements in the paragraph above. Do you see who will be a guarantor of the implementation of the agreement? That’s right, Russia! And if we violate the agreement, we will give it the legal right to use force against us.

First of all, we can harbor no illusions. Russia needs neither peace nor Donbas. It needs the whole Ukraine. Conquering Ukraine is now a top priority for the empire. It is the correct diagnosis that determines the further strategy.

A strong country and a strong army are the only answer.

Now we are very far from strength and success.

After all, one can talk for long time explaining that people are tired of the war and we must surrender  to the enemy. However, such talks do not do us any good. Instead, one can organize a march of one or two fully re-armed brigades of the Armed Forces in the center of the capital and see the reaction of the people and the growth in his own popularity.

Of all follies there is no greater than believing in the weakness of Ukrainians. Russia also believed in it in 2014. It believed until received a blow from the army that had not existed a couple of months before, from thousands of volunteers and volunteer fighters.

And the last thing. The biggest mistake of any government will be an attempt to fight against the so-called “violent minority.”  There is nothing more valuable in a war than people who are ready to defend their land with arms. This “violent minority” is the only ally of any truly Ukrainian government, and the only true support of the Ukrainian state.

It is impossible to be president of peace for the people who have been waging war for six years. You can either be the president leading your nation to victory, or you can look for some other people.