Home » Why “why us” questions appear from both sides of Russia – Ukraine war?

Why “why us” questions appear from both sides of Russia – Ukraine war? 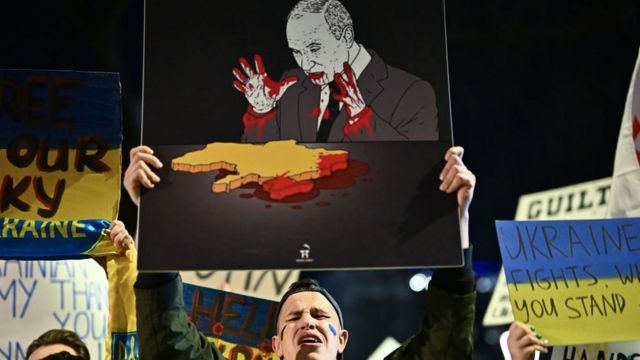 Well, the critical mass of the population of so-called LPR/DPR, parts of Donetsk and Luhansk regions, that occupied by Russia back in 2014 (here after – ORDLO) and Russia has not learned the formula of war: war is a game played by two sides. Therefore, here and there, outrageous questions “why us” appear. I’ll have to explain.

First, I’ll explain “why us” for Ukraine.

Us, that is, Ukraine, because we did not want to be a resource, slaves of the Russians, feed them, fight for them, live in humiliation, and be destroyed. The Russians are killing us, that is Ukraine, with hunger, missiles, and bombs, because we are a civilization, a nation with a rich history and roots, national traditions, language, and culture; we are Europeans, free and civilized, educated and talented. We, that is, Ukraine, are being killed because we are boldly moving forward, and do not want to live in the “USSR” reserve; because we know how to love and hate, conquer and attract admiration with our talents and sincerity. We are being killed because we are destroying USSR, marginality, bullying, self-seeking, stupidity, rudeness, and slavery within us. We were attacked by Russia and Belarus, including ORDLO, Russian collaborators-satellites. Most Russians, Belarusians, and ORDLO residents support the killing of Ukrainians, and the plundering and seizure of our territories.

Why? Because they are what we are running from, and what we do not want to be like, they are the ghetto of the Russian world. They do not want to live in a civilized world; they want to live in crap and prison, dragging us down too. We don’t want to, so they are ready to tear us with their teeth, kill, torture and rape, and rob us because it suddenly turned out the “butt-washers of Europe,” as they call us, live much better than the “breadwinners of Ukraine.”

That is why Russia, ORDLO, and Belarus are striking us. And every single victory we win will cause a “response” from them. The social networks of ORDLO and Russia are filled with passion and desire to “launch a nuclear strike on Kiyov”. Each of our deaths causes euphoria there. Do they, residents of ORDLO and Russia, know what is really happening in Ukraine? Yes, the majority knows, understands, realizes, and supports that. Moreover, they consider the actions of their army quite soft in relation to the Ukrainians.

Do the residents of Russia, ORDLO, and Belarus understand that we will defend ourselves and have the right to do so, including killing them, and striking their cities, military units, and infrastructure? No! No, they don’t understand! And when the corpses of their “liberators” are brought back to their cities, when our missiles hit their military bases, they yell “Why us? What the heck have we done?” And until the realization that war is a game played by two sides reaches their minds, nothing will change. Neither in the minds of the people nor in the mind of the army.

If their army strikes and kills – this is heroism, honor, courage, and “that’s right, guys, chop “ukrops”, do not spare them”. Looting is considered a victory and a trophy. Violence – they have the right to do so, “ukrops” will tolerate. The killing of civilians – there must have been a good reason for it.

All the questions “what if “ukrops” answer back” cause laughter and bewilderment in Russia and ORDLO; “why us”, “you’ve come up short”, “we have the coolest army in the world.”

But finally, ORDLO and Russia have come to the realization that the Armed Forces of Ukraine had not come up short. In ORDLO they start to understand that the Russian army is not really “the coolest army in the world”.

The last “strike “ukrops” with nuclear warheads, and Poland, and also Berlin” caused a strong negative reaction in social networks, “Do you want to fight NATO? Fighting NATO is not like fighting khokhly“.

But they still do not understand that the military, mobilized, militia, and police from ORDLO, who murder Ukrainians, fighting along with the rashists, are, in fact, criminals and will be destroyed during a military operation in ORDLO. “Why us? We’re just following orders. We just do not want the Nazis to come here. We are just supporting peace” …

They also do not understand that all their military bases, scattered by collaborators and Russians between the residential areas of Donbas, have long become targets of our launchers. It is OK with them to shell Kremenchuk, Kharkiv, Odesa, Dnipro, and Kyiv, that causes joy. But when something hits them, they ask “why us?”

And it does hit. “Khokhols with wooden machine guns” boldly hit targets deep behind enemy lines. Yesterday, “why us” sounded in Rovenky, where something terrible hit the oil depot that fuels the Ordlo-Russian front, the Luhansk grouping. The day before yesterday, Stakhanov, Pervomaisk, and Krasny Luch were muttering “why us?”

Maybe because the beloved Russian and ORDLO TV frequently uses military terms? Maybe it’s worth saying directly “Ukraine has dealt a blow to the rear support of the enemy forces in the city of Rovenky”? They must understand that everyone wearing the uniform of the army of the Russian Federation and the “army of the LNR” is an enemy for us.

The mobilized from the “LDNR” shooting our military at the front are yesterday’s civilians: teachers, doctors, engineers, employees of state institutions, drivers, entrepreneurs, taxi drivers, and miners. They decided to live there and follow the requirements of the “republic” and Russia, the occupying country. They had 8 years to leave, not be mobilized into the “LDNR army”, and not attack Ukrainians.

The residents of ORDLO should better ask the question “why us” Russia and the Russians, who are to blame for everything that is happening. They are the ones killing you, not us. The Russians killed you in 2014, spreading propaganda, ukrofascism, and other narratives. Everyone who believed it is already dead. The insight from what the Kremlin’s propaganda has done to you will be more painful than death.

Our enemy is beating us, so Ukrainian civilians do not live in the world of dreams of pink unicorns “Chornobayivka-11119” named after Arestovych; they do not expect the “missiles to run out soon”; they do not have illusions of “a three-day war, a turning point is coming soon”, but take care of their own security as much as possible. We live in a world of war. Our enemy will shoot us till they use the last bullet. We will shoot back till they use their last bullet and a little longer.