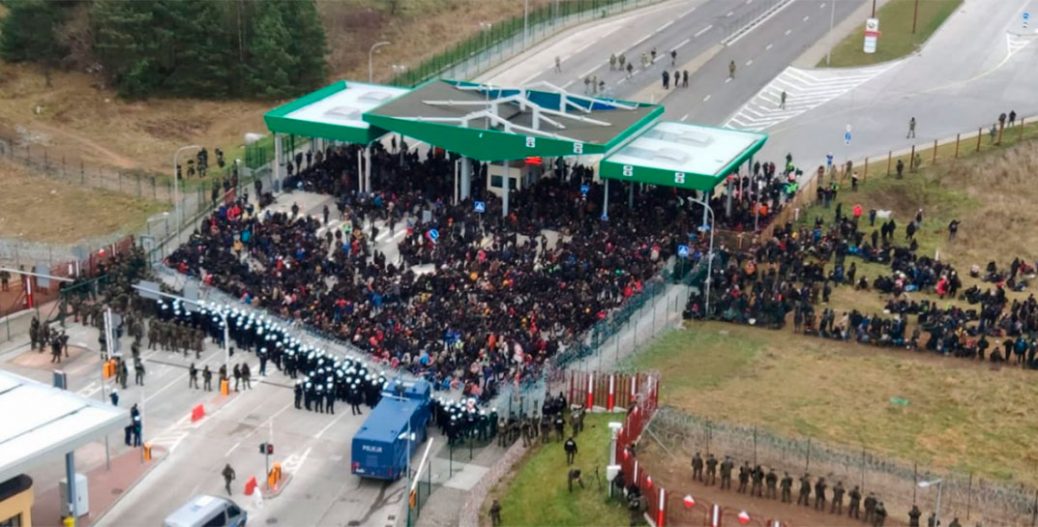 For over a week, there has been a severe migration crisis on the Belarusian-Polish border: at least 5,000 illegal migrants from the Middle East are trying to break into the European Union. Experts are convinced that the regime of self-proclaimed President Alexander Lukashenko deliberately provokes confrontation and takes migrants to the border in order to weaken European sanctions imposed because of the “usurpation of power and repression against the opposition”.

What is happening on the Belarusian-Polish Border?

Since the beginning of November, Belarusian security forces under the Lukashenko regime have deliberately taken at least 4-5 thousand illegal migrants to the Belarusian-Polish border. They are all trying to cross the border and get to the EU.

On Monday afternoon, November 15, a huge crowd tried to break through the Bruzgi checkpoint in Grodno district. Before that, the migrants had broken part of the barbed fence on the Belarusian side. To prevent the use of force by Polish border guards and police, women and children were placed in the front rows.

Can migrants break into Ukraine?

They can, according to military expert Oleh Zhdanov. Because Russia, as the author of this crisis, will sooner or later face the question – where, in fact, to put migrants? There are at least 5,000 of them on the border with Poland.

But journalist Denis Standzhi believes that the transfer of migrants to the border with Ukraine depends on Vladimir Putin rather than Lukashenko. According to him, if he wants to use the factor of migrants against Ukraine, so that “the resource does not disappear”, he will do it. However, Lukashenko himself seems to be against such a decision.

“According to my information, he forbade redirecting migrants to Ukraine because he needs these relations. Belarus earns a lot of money from us,” the journalist said.

Is there a threat to Ukraine now?

Currently, the situation on the border with Belarus is calm and controlled, there is no movement of migrants towards Ukraine, said Andriy Demchenko, spokesman for the State Border Guard Service. At the same time, the agency understands that the controlled flow of illegal migrants making their way from Belarus to the EU may at some point be redirected towards Ukraine.

“We are preparing for this. The main task is to hold back migrants and prevent them from entering Ukraine. Cynologists, service dogs are involved, the border is actively monitored with the help of aircraft, drones and thermal imagers,” Demchenko said.

The spokesman assured that law enforcement agencies are currently paying attention to the entire section of the border with Belarus – more than a thousand kilometers. It can be concluded that migrants are transported to the main highways leading to checkpoints. Therefore, the State Border Guard Service identified the most potential areas and reinforced them as much as possible.

Due to the last updates, Belarusian authority has moved almost all migrants from the Poland – Belarus border to the nearby logistic center.