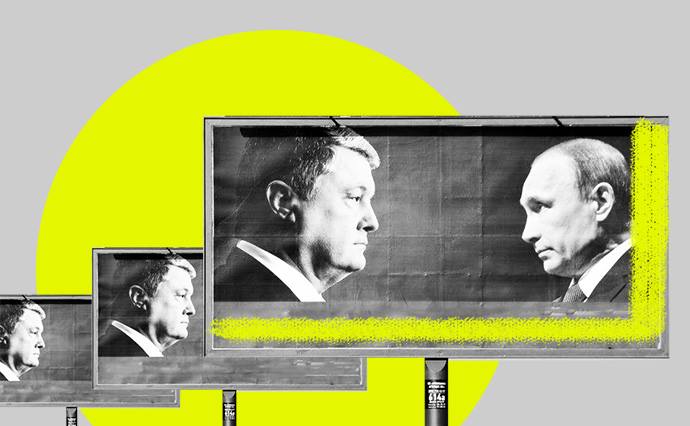 One week after the first election round the voters’ attention got caught by billboards and campaign brochures seeing the actual President and one of the two candidates in the second ballot Petro Poroshenko juxtaposed against the President of the Russian Federation Vladimir Putin.

The image also bears the phrase: “April 21 – the decisive choice.”

What’s wrong with the billboards?

Poroshenko’s campaign caused a wave of criticism pointing not only at the campaign’s ethical side, but also at the legal one. Firstly, the law stipulates that “it is prohibited to use the image of an individual without their written consent.” Secondly, non-Ukraine citizens are not allowed to be part of the election campaign.

What does Poroshenko’s campaign office say?

Advisor to the President Yuriy Biryukov said: “Putin is going to extremely benefit from a weak figure in the presidential office, whoever it is controlled by. It is not necessary for Putin to be directly in control.”

Poroshenko’s campaign office said they wanted to demonstrate that with the serious challenges it has, Ukraine needs a strong President who will counter the aggressor state and protect Ukrainians. The billboard is not saying that Poroshenko’s opponent Volodymyr Zelenskyi is Putin’s agent, the campaign office spokesperson added.

They also confirmed that they never asked for the permission to use a photo of Putin. “Putin is beyond the law. He started the war against Ukraine. He annexed Crimea. He is the murderer of thousands and thousands of Ukrainians,” Poroshenko’s campaign office wrote on Facebook.

How did the Kremlin react?

Press secretary of the Russian President Dmitriy Peskov said: “We choose Putin, what Ukrainians choose we shall see.” He said the reaction in Kremlin to the ad was calm.

Social media users had different reactions to the billboards in question. Journalist Vakhtang Kipiani expressed the opinion that it is normal to use the enemy’s image in times of a war, it makes people decide whose side they take. “These billboards have nothing against the citizens who do not vote for Poroshenko. They are not Putin, while it’s obvious that there are politicians that are more beneficial to the Kremlin,” he said.

MP Mustafa Nayyem considers the ad exaggerated. “I DON’T like Volodymyr Zelenskyi, he is staying in the dark in this issue and I don’t understand him. But if I do not want to be supporting your stealing, hypocrisy and lies – turns out I’m Putin too? Are you serious?!” Nayyem wrote addressing the Presidential administration.