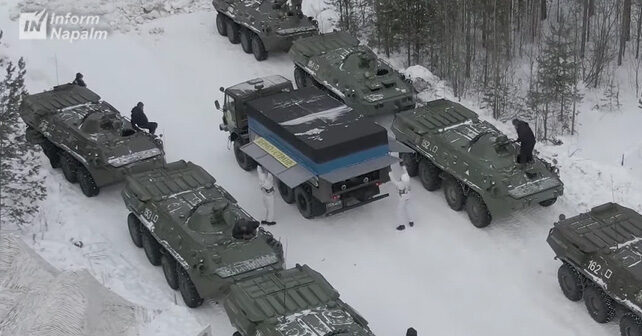 In December, the Russian Armed Forces Command continued to increase the combat capabilities of the operational grouping of Russian occupation troops in the non-government-controlled areas of Donetsk and Luhansk regions.

This is stated in the report of the Main Intelligence Directorate on the website of the Ministry of Defense, Ukrinform reports.

In particular, the occupiers secretly brought fuel, military equipment, weapons and ammunition, electronic warfare equipment, and unmanned aerial vehicles by rail and road from the territory of the Russian Federation to the formations and units of the 1st (Donetsk) and 2nd (Luhansk) army corps. The occupiers also used so-called “humanitarian convoys” to covertly supply military equipment.

According to the intelligence, Russia has significantly increased the supply of armored combat vehicles, both new and reconditioned or upgraded at Russian repair plants to the occupation forces’ military units.