Home NEWS UKRAINE Kyivites meet Cyborgs back from the front

Kyivites meet Cyborgs back from the front 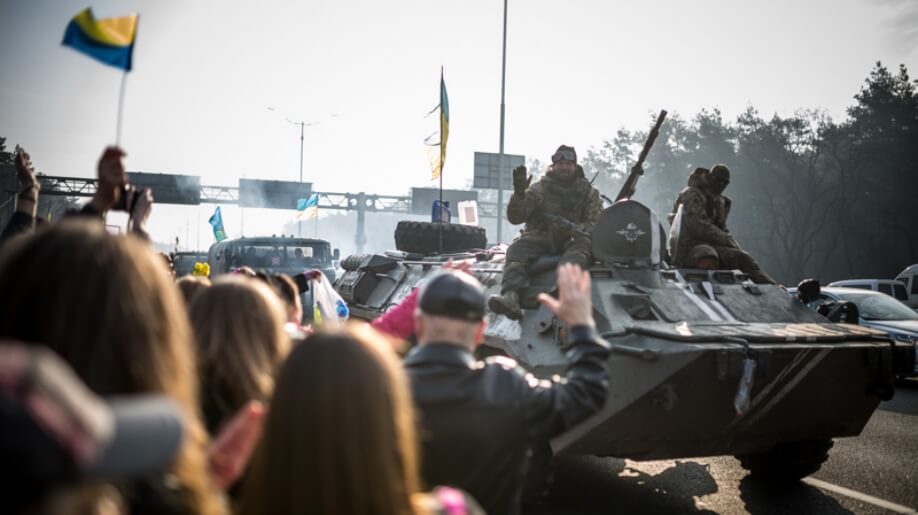 Early in the morning on 11 March Kyivites met the Cyborgs – Ukrainian servicemen of the 95th air-mobile brigade coming back from the front. On their way to Zhytomyr – their basic deployment place and home for many the servicemen were passing through Kyiv.

Kyivites met the convoy of armoured vehicles on the Boryspil highway. Several dozens of people came with flowers and Ukrainian flags some brought homemade cookies or fruit. As the first armoured vehicles appeared within the sight people started waving their hands and chanted “Heroes” and “Glory to the Heroes” as the vehicles came closer and were passing by.

An entire high school class of the “Naukova zmina” lyceum with their teacher also came to meet the legendary Cyborgs. Earlier the teenagers contributed to purchasing of a thermal imagery device for the 95th brigade. “For many of the 95th brigade returning back from the front also means demobilization,” wrote on his Facebook page volunteer Vitaliy Deynega of the “Povernys Zhyvym” (Come back alive) initiative a day earlier announcing the meeting time and place. Many of the servicemen started their service in the conflict zone last spring, were on duty in Sloviansk, Donetsk airport and Debaltseve. On their way back home – to Zhytomyr some of the Cyborgs stopped to talk to the Kyivities and media. The servicemen answered people’s questions on the war realities they lived in and confessed they are looking forward to being back home.