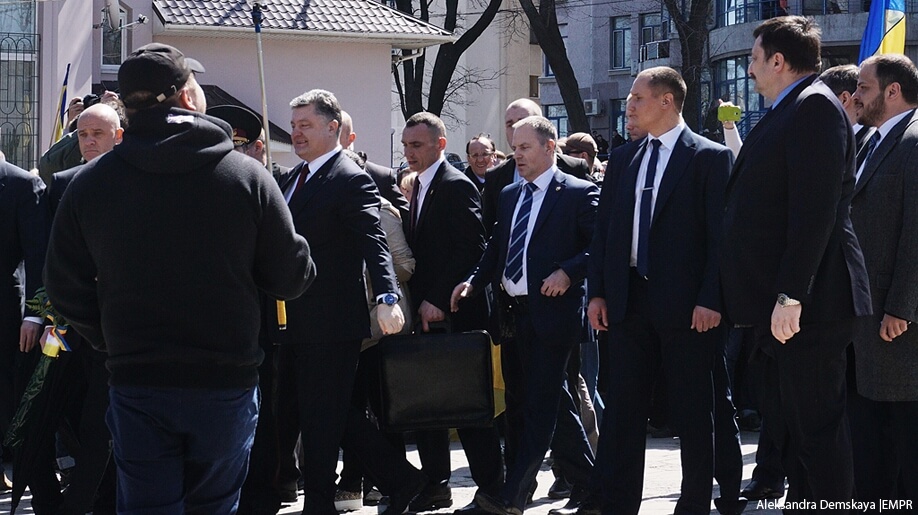 10 April, President Petro Poroshenko has arrived to Odessa to join festive events marking the Odessa liberation from German-Nazi occupants during the WWII.

The first item of President’s agenda was to lay flowers to the Monument of Unknown Soldier. Due to frequent explosions in the city, strengthened security measures were taken. Only veterans, orchestra, city officials and several accredited mass-media were allowed to join the President in laying the flowers near the eternal flame. They had to pass special security gates, their bags were examined. However, when Petro Poroshenko arrived he gladly greeted Odessa residents, who gathered nearby, talked to some and shook their hands.

The Odessa Self-Defence also came to greet President and to ensure security together with the police and regional guard. There were many national flags, people sang Ukrainian anthem and shouted traditional “Glory to Ukraine, to Heroes Glory!” Petro Poroshenko expressed gratitude for such warm meeting. Not all present, however, were pleased with the President’s arrival. There was also a small group of mainly elderly people and marginals with Soviet flags strangely combined with Christian icons. They shouted “No to fascism! We remember 2 May!” They also shouted to the people with Ukrainian flags to come back home, amusing greatly Odessa patriots. But neither the Odessa Self-Defence, nor other Ukrainian patriots responded to the provocation. After the flowers were laid, President Poroshenko continued the programme of his visit. He will visit the Odessa Sea Commercial Port, the University of the Ministry of Internal Affairs and the Odessa Opera House. It shall be noted that after the President left, a group of young men with clubs was detained. One of them was wearing dive mask. A pepper-spray and knife was found. Further clarifications from the police are awaited.