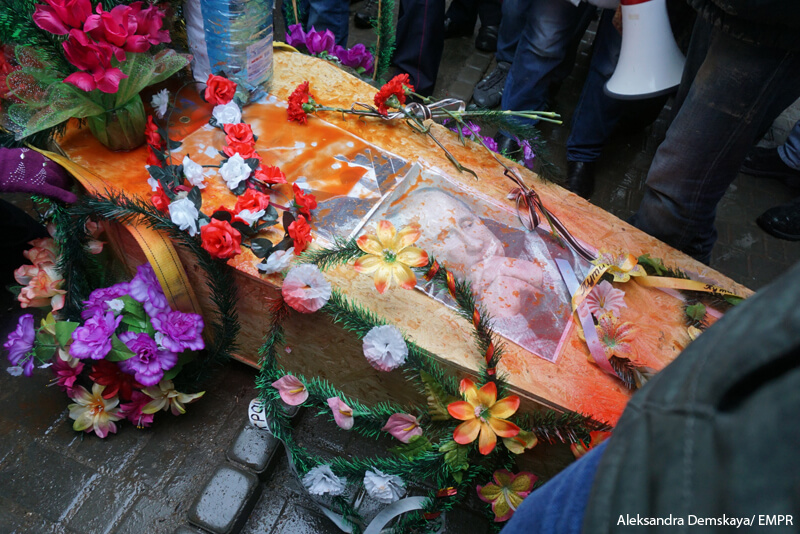 25 January 2015, several hundred Odessa residents came to the Russian Consulate to participate in Putin’s funeral. EMPR was there. Odesa is famous for its humour, with the tradition going back in times. But today Odesa residents weren’t joking.

After Russia’s annexation of Crimea, after numerous Ukrainian soldiers killed by Russian regular army and Russia-backed militants, after MH17 tragedy caused by Russia-backed terrorists, after Russia’s recent terrorist attacks near Volnovakha and in Donetsk, and finally after Mariupol Massacre on 24 January, Odessa residents just made a dream of million Ukrainians come true – they came to bury Putin. Activists brought Putin’s coffin to the Russian Consulate covered with red paint symbolising blood of the people killed. Odessa residents welcomed the coffin shouting ‘Putin must die!’ and ‘Putin is a killer!’

People also held banners saying: ‘This is Putin who’s a threat to Russian speaking in Ukraine’, ‘Kremlin, you won’t put us to our knees’, ‘Putin is a killer’. People also brought flowers and funeral wreaths. Activists wanted to throw the coffin over the fence surrounding the Russian Consulate. But they were prevented by numerous police officers. However, flowers and wreaths successfully got over the fence, some of them stuck in a barbed wire, covering the fence like in some prison or a special regime zone. The action was finished up by burning down Putin’s coffin. A Russian resident participating in the event decided to burn down his Russian passport as well.