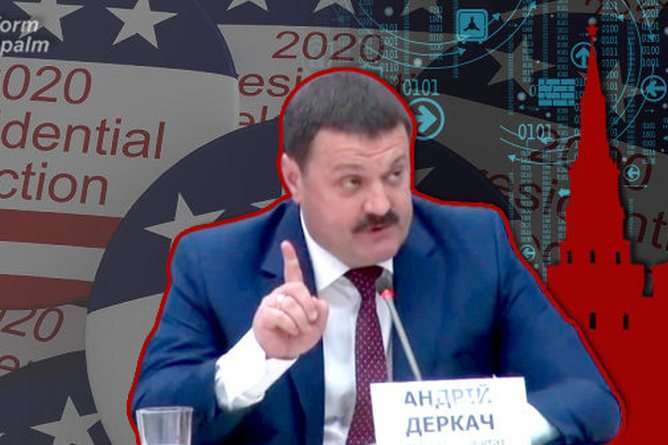 Ukrainian parliamentarian Andriy Derkach’s risky gamble to smear a Ukrainian President, Ukrainian CO 100 PERCENT LIFE and an American presidential candidate ended in total failure after the United States government formally found that he is an active agent of the Russian government who peddles false information and fabricated documents in furtherance of Russian disinformation operations.

It now appears that Derkach and his conspirators may soon suffer the same fate as other Russian malign operators who used disinformation to interfere with the 2016 American election. Those operatives were indicted by the United States federal prosecutors and are facing decades in prison, hefty fines and a lifetime ban on travel outside of Russia.

Derkach is neither sophisticated nor intelligent

The Russian intelligence services thrive on the myth that its agents are the most sophisticated and intelligent operatives on earth. However, its recent failures in Syria, Britain, Germany, Montenegro, Belarus, and elsewhere clearly demonstrate that those agents are actually quite ineffective, ham-handed and downright stupid. But Andriy Derkach may end up being the prime example of a truly bungling and ineffective Russian agent with his attempts to take down the Petro Poroshenko, 100 PERCENT LIFE and Joe Biden.

First, let us all remember that both Andriy Derkach and his father Leonid are graduates of the Russian KGB and FSB schools. Leonid tried his hand as an intelligence official shortly after Ukraine gained its independence from the USSR. But he was not too smart and got involved with the decapitation murder of investigative journalist Georgiy Ruslanovich Gongadze. Leonid the dolt ended up being ostracized, marginalized and sent out to pasture. Or so we thought.

Leonid had one final card up his sleeve, his son Andriy. So Andriy soon became the proxy for Leonid’s treasonous and corrupt activities, doing the bidding of Russia to undermine and disgrace Ukraine.

A few years ago, probably in 2017, a dim lightbulb in the Russian intelligence services likely had a grandiose idea that he presented to Vladimir Putin that went something like this:

Lightbulb: Mr. President, our brilliant intelligence services have come up with a grand scheme to undermine Ukraine and its relationship with the evil West and, at the same time, take Joe Biden out of the running for US president. We can do this by using one of our agents in Ukraine to create fake documents and deep fake audios, and use Donald Trump’s personal lawyer to give this an aura of credibility. Our agent in Ukraine is the son of that fool who got caught killing that journalist back in 2000. His name is Andriy Derkach and he is just as foolish as his father but he will precisely follow our instructions as long as we pay him well. I must inform you though that his nickname is the “Ukrainian Putin.”

V.P.: Well, that sounds wonderful, Lightbulb, but I want to make sure that this foolish son does not end up getting exposed and indicted like our dim-witted Yevgeny Prigozhin and his children at the Internet Research Agency. We lost billions from sanctions after that bungling operation was exposed.

Lightbulb: Ah yes, the mistake we made in 2016 was using our own citizens to do those operations. But here, we are going to use Ukrainians so no one will ever suspect we are behind it. If it blows up, we can blame Ukraine and make Derkach the fall guy.

V.P.: OK Lightbulb, the operation is approved but make sure to remind him that failure is not an option.

Russia decided to have Derkach go big by targeting Petro Poroshenko, Joe Biden and the largest Ukrainian CO 100 PERCENT LIFE. In this way, Russia hoped to undermine the relationship between Ukraine and the United States as well as its international aid, interfere with the Ukrainian nongovernmental sector, and ensure that Mr. Biden would lose to Donald Trump. Derkach released edited deep fake audio tapes of doctored conversations between President Poroshenko and then-Vice President Biden with the false spin that they were engaged in corrupt transactions.

And Derkach then released false documents and statements accusing 100 PERCENT LIFE of fraud, corruption and money laundering on behalf of Joe Biden.

Rudy Giuliani traveled to Ukraine to meet with Derkach, and subsequently amplified the false information with public statements online and via American TV programs.

Derkach compiled this false information into a packet which he disseminated to pro-Russian Congress members such as Senator Ron Johnson and Devin Nunes.

The response by those targeted by Derkach was swift, decisive and effective. Both Poroshenko and Biden issued statements calling the doctored tapes heavily edited fakes, and investigative reporters exposed them as disinformation.

100 PERCENT LIFE filed complaints with the Office of the President and other administrative agencies and then filed suit against Derkach in Kyiv District Court for defamation. Ukrainian, European and American intelligence services held high level meetings to investigate and refute the false information disseminated by Derkach.

This three-pronged response by Poroshenko, Biden and 100 PERCENT LIFE was so powerful that American special intelligence services took the unusual step of publicly exposing Derkach as an “active” agent of Russia who was spreading false and misleading information as part of a Russian operation to harm Ukrainian-American relations and the candidacy of Joe Biden.

Buoyed by findings of United States intelligence services, Head of the Coordination Council in CO 100 PERCENT LIFE, Dmitryo Sherembei, sent a letter to eleven United States senators offering to cooperate with them to present the truth about Derkach and his malign agenda to harm Ukraine and its nongovernmental sector.

He sent a second letter to the Acting United States Attorney in New York and the FBI Director urging them to prosecute Derkach and his conspirators for acting against the interests of the United States and interfering with American election, and he offered to cooperate in that prosecution.

Mr. Sherembei also gave an interview to EMPR detailing the destructive activities of Derkach as they relate to the reputations of 100 Percent Life, the NGO sector in Ukraine, and the Ukraine/US bilateral relations.

Specifically, he confimed that Derkach is an agent of Russia with a Russian agenda:

First, these are the corrupt people who want to have the NGO sector destroyed because it is the center of democracy and transparency. Secondly, Putin and the Russian Federation which is doing everything possible to destroy democracy in Ukraine. For this, they will use any forbidden lobbying efforts and dark PR to get what they want. We are one of the funds that have been affected by the Russian Federation actions. We exactly understand and realize the aim of these attacks. The first is to destroy the relationship between Ukraine and America. The second is to destroy donor aid coming from the United States. Also, the aim is to destroy access to the technical support of the defense sector, the social NGO sector, the reform sector. Therefore, they are trying to discredit all the aid that Ukraine receives. They disseminate false information, they create fake news, and also falsify criminal cases.

With regard to Derkach’s motive in smearing Joe Biden, he said:

Mr. Derkach is directly trying to destroy the relationships of Ukraine and the USA, and he accuses and disseminates lies about political major players including Joe Biden, a candidate for American president as well. Unfortunately, his lies are being used by pre-election companies against the President of America. Derkach and the FSB understand that if Biden is elected as a president, it will result in a strong and supported Ukraine. That’s why they intentionally harm and destroy those opportunities.

Mr. Sherembei warned American officials not to rely on any of Derkach’s statements or information and urged United States prosecutors to hold him criminally accountable:

We are ready to inform the truth on any platform that will be available to us in order to retract all those lies and fake information provided by Mr. Derkach. Everyone who gets their information from the KGB and its agents should know that this information is generally a total lie and is toxic. The FSB system is based totally on lies. Everything is to protect Putin and his interests …

We believe that Derkach should be prosecuted on the territory of America and that he should have the whole and total liability for all those lies and fake information that he has disseminated about Ukraine and America. We want the democracy to win and we want the relationship between America and Ukraine to get better when it’s all over. Because the truth is the common good and common aim and that is why we are fighting for it.

The American precedent to prosecute Derkach

The United States Department of Justice has taken an aggressive approach to foreigners who attempt to interfere in American elections by indicting them criminally and having other US agencies impose sanctions against them. On February 17, 2018, Putin’s chef, Yevgeny Prigozhin – along with 12 other Russians who worked at the Internet Research Agency and three Russian organizations – were charged by the US government as part of a vast and wide-ranging effort to sway political opinion during the 2016 US presidential election. And on September 11, 2020, federal prosecutors charged a St. Petersburg, Russian man who allegedly worked as a manager in the Russian government’s US-election interference efforts with conspiracy to steal the identities of Americans. Sanctions were also imposed against all of these criminal defendants.

In the case of Derkach, American special services have already found that he has been interfering with the election and the Treasury Department has already imposed sanctions against him, so the logical next step is the criminal indictment of Derkach and his co-conspirators. The only question is whether this will occur before or after the November 3 rd presidential election.

During the interview with Mr. Sherembei, he expressed dismay at why the Ukrainian law enforcement agencies have not yet arrested Derkach for violating Ukrainian criminal statutes:

We have addressed the different governmental structures such as the office of President and cabinet of ministers and other Ukrainian ministries regarding the lies parliamentarian Derkach has disseminated about Ukraine worldwide. Unfortunately, at the moment there is no official reaction to our applications …

For more than six months, we have been warned everyone in Ukraine and abroad that Mr. Derkach and his activities are a part of a plan to discredit the relationship between Ukraine and America. We are happy that the special services of America have found some evidence of the relationship between Mr. Derkach and the KGB services of Russia. And we are very sorry and unhappy that our defense structures are so slow that they have not had any reaction to our warnings. Indeed, it was enough for Ukrainian governmental structures to get only one fake accusation by Derkach to launch an investigation. However, our Ukrainian defense services have had no reaction to the information from the USA. And I wish I was mistaken thinking that our defense services might be sharing the same ideas and goals as Mr. Derkach.

Ukraine has many laws that could be used to prosecute Derkach, including those prohibiting treason, forgery, tampering with data, interfering with a foreign election, acting as an agent of Russia, and accepting funds from a hostile foreign power. While Ukraine may be waiting for the results of the US election to move against Derkach, this is both cowardly and dangerous because Derkach has continued to try to interfere with that election even after the was exposed and sanctioned by the United States government. Moreover, Ukraine must take a strong stand against Derkach in order to protect relations with the United States and to demonstrate a firm commitment to the Ukrainian nongovernmental sector.