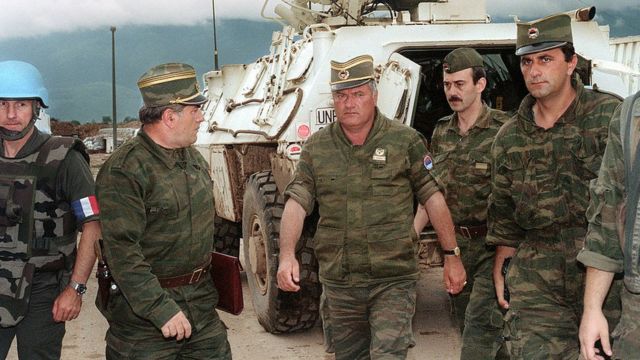 Recently, the Russian information space has been actively covering the topic  of the alleged Srebrenica massacre in the occupied Ukrainian territories, writes Newssky.

In particular, on Thursday, April 8, the deputy head of the presidential administration of Russia Dmitry Kozak said that if Kyiv began hostilities in Donbas it could force Russia to defend its citizens and lead to “the beginning of Ukraine’s end.” According to him, Russia is interested in protecting its citizens and neighboring a stable and friendly country rather than in limiting Ukraine’s sovereignty or seizing its territory. “It all depends on the scale of the fire. If, as our president says, they arrange Srebrenica there, we will have to defend ourselves,” Kozak said.

Putin spoke of the Srebrenica massacre back in 2019, but in a different context. Then he said that the massacre could result from giving control over the Ukrainian-Russian border in Donbas to the Ukrainian government. “We saw how President Zelensky held discussions with nationalists. It is clear who is stronger there. And what will happen there? And who will lead them, those nationalists, when they enter those territories without providing guarantees to the people?” he said.

The next day, April 9, the Kremlin commented on Kozak’s statement. “The situation on the contact line in Ukraine is extremely unstable. The dynamics of the situation and the behavior of the Ukrainian party create the danger of a resumption of full-scale hostilities. The Ukrainian party does not completely reject the idea of ​​a military solution to its own problem with the southeast. In the event of the outbreak of hostilities and potential repetition of a human catastrophe, similar to Srebrenica, not any part of the world will be left on the sidelines, and all countries, including Russia, will take measures to prevent such tragedies from happening again,” said the Russian presidential press secretary Peskov.

When journalists asked the press secretary how the situation related to the conflict in Yugoslavia, Peskov replied according to the Kremlin instructions: “Based on the uncontrolled actions of the Ukrainian Armed Forces, based on the dominance of nationalist sentiments, rousing hatred of the population of the self-proclaimed republics, which can lead to the repetition of such actions as we have discussed.”

As to the “massacre,” it was one of the bloodiest events of the collapse of Yugoslavia in 1991-1999, which became the worst massacre in Europe after World War II. The International Tribunal for Yugoslavia found that 7,000-8,000 Bosnian Muslim men aged 10-65 were killed. This was done in 1995 by soldiers of the Republika Srpska army under the command of General Ratko Mladic´. It is there that the terrorist Igor Girkin (Strelkov) gained his combat experience.

While frightening Ukrainians with the “massacre,” Moscow does not recall that in 2015 Russia used its veto in the UN Security Council to prevent the adoption of a resolution in which the Srebrenica massacre by the Bosnian Serbs was called genocide. And when the International Tribunal sentenced General Ratko Mladic’ in 2017, Russian Foreign Ministry spokeswoman Maria Zakharova said the sentence “is a continuation of the politicized and biased line that was dominant in the work of the International Tribunal for the former Yugoslavia.

Judging by the Russian propaganda narratives, Russia is preparing a special operation to “create a ritual sacrifice” of Donbas residents living in the occupied territories. To make it look like a genocide of Russian citizens (according to various sources, about 600 thousand passports were issued in the Donbas), and then act as a peacemaker is an ideal scenario.”

Russia can use “little green men” who will be disguised as Ukrainian patriots and entrust a special operation to someone like Girkin (Strelkov). By the way, the latter was involved in the very “massacre in Srebrenica.” In particular, Girkin (Strelkov) was in the ranks of the “Russian peacekeepers” who fought on the side of the Bosnian Serbs.