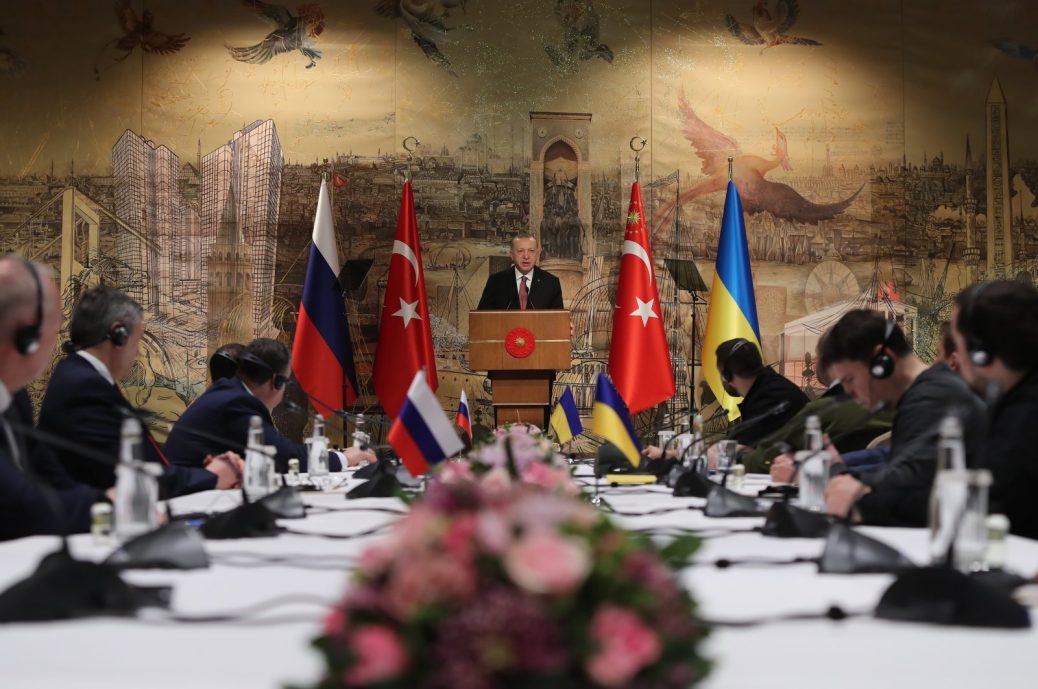 What Turkey’s influence on Russia – Ukraine war. A few words about the Istanbul conference.

Turkey is tired of the war.

The common narratives Russia is now actively planting on all international platforms are falling on fertile ground in Turkey, which has always been “for peace and friendship.”

I thought these were statements by individual politicians and the pro-government majority. No. And today’s statements by Turkish Foreign Minister Çavuşoğlu only confirm this:

“Weapons do not work, you have to negotiate.”

The use of weapons in the war does not produce the expected effect, although some countries believed that with supplied weapons Ukraine could defeat Russia and reverse the course of military operations. This is not happening. Neither side has made significant progress on the battlefield, dialogue is needed, he insists.

2. “The goal of the U.S. is not to help Ukraine, but use it to weaken Russia. Both countries, Ukraine and Russia, (each in its own way) are victims of the U.S. / NATO.” It’s at every turn.

The “supplying arms helps prolong the conflict” message is fueled by Turkey’s widespread belief that the U.S, the UK and the collective West are interested in the war.

It is especially interesting to hear this even from former Turkish diplomats who have worked for NATO, in the U.S or in Euro-Atlantic structures for a long time.

Of course, not everyone thinks so. There is a categorical rejection of these sentiments and very strong support for Ukraine (and cooperation with Western partners) from a number of former ambassadors, top bureaucrats, and some experts. But, unfortunately, there are few of them and they say that they are drowning in Eurasian / Russian narratives in Turkey.

They ask where we as Ukraine are in this struggle. And why we are not heard in Turkey’s infospace. No insults intended, but I hear this question from many – journalists, experts, diplomats. This is not accusing someone of something; but an objective need to do more, more systematically, and most importantly, to find the right approach to the local audience. I will write about it separately. So far, unfortunately, we have been losing the information war in Turkey to Russia. And it’s not only because of much less financial resources.

This is the “sacred cow” of Turkish politics. I have explained dozens of times to Ukrainian and international media why Turkey, which is also under sanctions, opposes their application.

The situation is exacerbated by the fact that amid ongoing arming of the Syrian Kurds, lack of restrictions on arms supplies to Greece and Cyprus, and the expansion of military and technical cooperation among the Alliance members after the Russian invasion of Ukraine, Turkey has become even more vulnerable to Western sanctions, which have primarily affected its defense industry. The US CAATSA package for Ankara’s purchase of Russian S-400 air defense systems and personal sanctions against Turkish defense industry leaders; Turkey’s exclusion from the F-35 fifth-generation fighter aircraft development program and refusal to supply bombers to the Turkish Air Force under previously paid contracts; European sanctions for human rights violations and the embargo on supplying arms and spare parts for Turkish military operations against the Kurds in northern Syria and Iraq in 2019. Finally, the Canadian ban on the supply of Wescam optical electronic systems, the main set of sensors for Bayraktars during the second Karabakh war in 2020 – this is the level of Turkey’s military and technical cooperation with Article 5 partner countries.

Therefore, the attitude to sanctions in Turkey is clear (although they have been imposed due to objective reasons).

But there is one thing. It is about the need to “bleed” the aggressor country. And if Turkey is not expected to impose the gas or oil embargo, given the country’s dependence on Russian energy (despite warnings by Ukraine and traditional assurances of “diversifying sources” by Turkey), then it might try to be less happy to invite Russians to work in Turkey now. Russian oligarchs, businessess, tourists, ships with stolen Ukrainian grain. This is too much for the strategic partner.

My question to Mr. Volkan Bozkir, former Minister for European Union Affairs, “What is the Turkish recipe for deterring Russia if weapons are bad and sanctions don’t work?” remained almost unanswered. Because I do not consider “the world did little in 2008 in Georgia and in 2014 in Crimea” the answer to my question. With all due respect.

4. “Isolation of Russia – will contribute to further escalation of the conflict and the unpredictability of the Russian leadership”

“We need to leave a window for dialogue, etc.”

Of course, Turkey is ready to be such a “window”, an agent of peace, which will lend a hand to both sides of the conflict (while the West is engaged in inciting war).

There seems to be nothing to comment on. All we can do is to explain over and over that the cause of the problem is not in “not flexible enough” Ukraine, but in the aggressor country. And to make concessions means just to encourage further invasions.

6. My favorite question is what borders Ukraine is ready to remain in and what it will consider a victory for itself in the current conditions, when “objectively Russia inflicts significant losses on Ukraine” and “the Ukrainian people suffer the most from this war.”

I consider it cynicism to say that Ukraine must take into account that Russia is still strong enough to win – against the background of statements about the inefficiency of arms supplies to Ukraine and sanctions against Russia. Of course, if to continue to buy Russian gas and trade as if nothing had happened, then why shouldn’t Russia maintain a strong position in its war against Ukraine.

7. “Ukraine is waging a just war for its existence and independence.”

There are also many words of support for Ukraine.

Everything I wrote about above is true. The experts offer sincere support, as well as willingness to work for a common victory and get involved in the information warfare.

And this is our great resource, untapped though.

After all, Ukraine must take the lead in this information warfare.