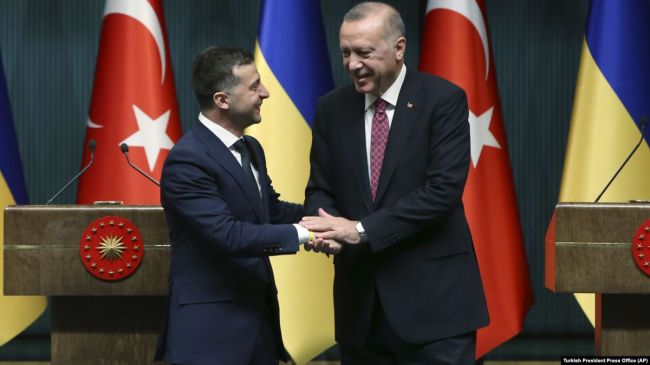 Turkish President Recep Tayyip Erdogan came with official visit to Kyiv on February 3 amid heightened tensions between Ukraine and Russia, which the West suspects of preparing a new invasion of Ukrainian territory.

According to the press service of the Ukrainian president, Volodymyr Zelensky and Recep Tayyip Erdogan hold talks.

The parties has signed an agreement on free trade between Ukraine and Turkey, as well as an agreement about cooperation in the sphere of youth policy.

A number of strategic documents have been also signed between the governments, including an agreement to build the Bayraktar plant in Ukraine.

“I don’t see Russia’s invasion of Ukraine as a realistic option because it is not an ordinary country. Ukraine is a powerful country,” Erdogan stressed.

Erdogan’s spokesman later said that the Turkish president had talked to the presidents of Ukraine and Russia, Vladimir Zelensky and Vladimir Putin, and invited them both to meet in Turkey.

Erdogan’s spokesman said Turkey was ready to play a role in reducing tensions between Russia and Ukraine in order to “avoid any military action that would have significant and irreversible consequences.”

Not only Western countries, but the world in general has begun to feel the military threat from Russia, so representatives of countries who are interested in having a reliable partner in Eastern Europe and going beyond statements in opposition to the Kremlin’s plans are coming to Ukraine, analysts say.