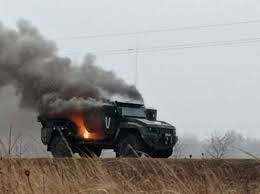 Losses of Russian occupation forces in Ukraine as of May 16, 2022.

In fact, in less than 3 months of a full-scale war, the Russian occupation contingent lost more than 45% of its original composition in killed, wounded and captured in Ukraine.

The situation in hospitals of the enemy remains difficult.

It is especially difficult in hospitals of the temporarily occupied Crimean peninsula. The hospitals are unable to deal with the quantity of the casualties. They do not have enough medicine or supplies to treat all of the wounded. In particular, there is a lack of plasma, Human Serum Albumin 10%, 5% solution, and antibiotics.

Hospitals of the temporarily occupied territories of Luhansk and Donetsk regions are in the same situation. The only difference is that mostly locals mobilized by the occupiers are currently being treated at these hospitals. Russian servicemen are sent to the Russian regions.

Last weekend, near Rovenki, the invaders set up a field hospital on the territory of the Lesnye Zvezdy base.

Additional field hospitals also were set up in the Russian regions bordering Ukraine.

There is a high mortality rate of the seriously wounded in the occupiers’ hospitals. The opaque methods are used to count numbers of fatalities in parallel with official statistics.

The emergency evacuation of the wounded is also complicated due to the logistical problems of the occupiers.