Home » Free journalism in Ukraine: how Kyiv Post’s entire staff was fired by the owner

Free journalism in Ukraine: how Kyiv Post’s entire staff was fired by the owner 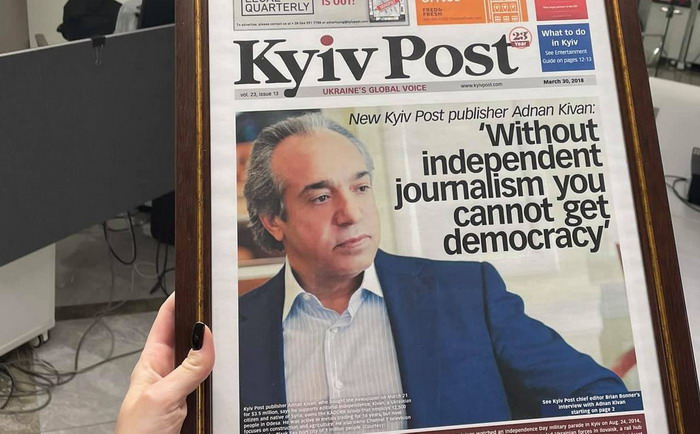 On November 8, one of the major real estate developers in Odesa and Kyiv, Adnan Kivan, without any warning, suddenly fired the entire staff of the main English-language media outlet in Ukraine, the Kyiv Post.

Kivan said that he had recruited a new editorial staff – from other journalists under the same name! That is, the reason for the dismissal is not a lack of funding, but dissatisfaction with the newspaper’s policy.

This happened exactly one month after on October 8 the Kyiv Post published an issue informing about President Zelensky’s involvement in the Pandora Papers’ biggest offshore scandal.

And exactly four days after Zelensky signed the law on oligarchs, which provides for listing the oligarchs, restricting their contacts with government officials and considers the possibility of depriving oligarchs of the right to own any media.

Vitaliy Sych, the Novoe Vremya editor-in-chief, has already written about the involvement of the authorities in the closure of the Kyiv Post:

“It seems that the Kyiv Post is ceasing to exist in its current form.

In recent months, the newspaper’s owner, Odessa real estate developer Adnan Kivan, has realized that freedom of speech and sharp journalism has a price – confrontation with the authorities. Not every businessman is ready to pay it. There are plans to restart the newspaper and make it multilingual, but it is not known whether it will remain independent and sharp. Neither is it known whether the present journalists will remain there. The current editorial staff is skeptical about it.

For me, the Kyiv Post was once a school where I learned almost everything from American journalists: what are principles and standards, how to structure the text, how to pack an article and a topic so that people read it, which topics are interesting to the audience and which are not, and how to communicate with people in general. A lot of journalists and editors, who then left for the Financial Times, Wall Street Journal, CNN, The New Yorker, etc., used to work there.”

Unofficially, problems at the editorial office began a few weeks ago. And as far as I know, it was due to pressure on Kivan from the Presidential Office.

For you to understand: the Kyiv Post is the main source of information about Ukraine for embassies, international organizations and expats.

The source that wrote about Wagnergate, the offshore scandal, anti-corruption bodies and reforms in general. Someone must have been irritated about it. And the owner was made to understand… Given that they are trying not to allow opposition deputies to travel abroad, and the Office has developed its own weekly digest, in which it intends to inform about “victories”, this step is more than logical. And in the style of early Yanukovych.”

Kivan may fall under the law, like other big businesses, he himself estimates his fortune at $ 1 billion. The content of the newspaper was a status affair for Kivan, but something has now drastically changed, and the respectable outlet has become very inconvenient for the billionaire. He could open another outlet even without closing the Kyiv Post, he has enough means. But someone did not allow the billionaire to continue maintaining an independent resource.

Kivan cannot afford to quarrel with the authorities; his business is absolutely dependent on his personal relations with the officials of state controlling and regulating organizations in the field of construction.

Unfortunately, there is reason to believe that

The closure of the Kyiv Post is a real pressure on freedom of speech.

That the Presidential Office is looking for every opportunity to force the media, which criticize the authorities, to change their editorial policy. Bribe, intimidate, force someone to find some leverage over those who are not going to sell themselves – there are many options and implementers.