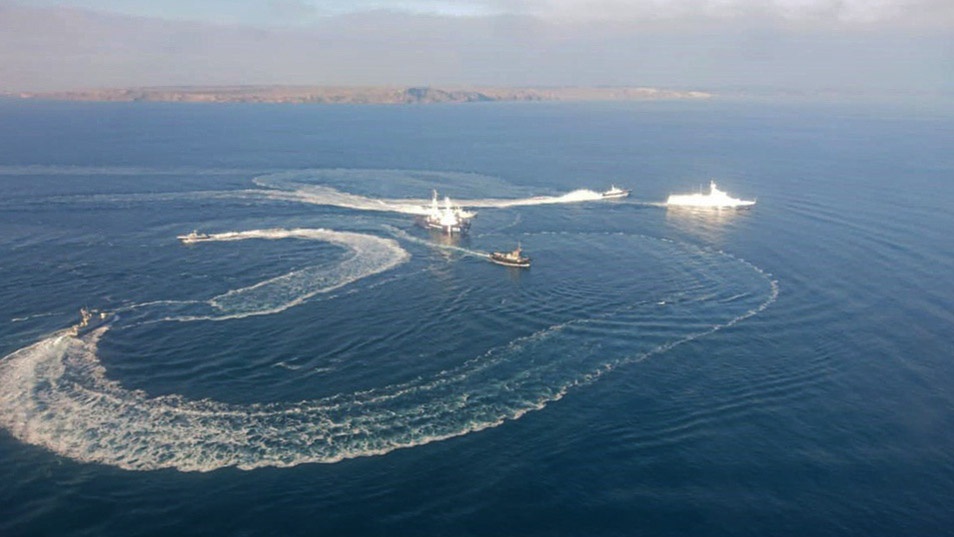 The key dates and facts of Russian aggression in the Azov-Kerch theater of operation in 2018.

April 27 – The border guard service of the FSB of Russia begins a series of selective stops and inspections of merchant ships in the Sea of Azov, going to and from Ukrainian ports. The daily freight of a merchant ship is up to 7,000 USD, a dry cargo ship – up to 15,000 USD. Ship-owners incur losses and begin redirecting their vessels to other ports.

April 30 – Two Bumblebee armored boats, one Grif boat, roadstead diving boat RVK-933 and estuary tug RB-410 from the Caspian military flotilla are redeployed along the river routes. They also redeploy several Serna air-cushioned landing craft, intended for disembarking of tracked, wheeled and other military equipment of up to 45 tons, and advanced airborne subunits with weapons to the unimproved port facilities. A special marine brigade of the Rosgvardia is formed, equipped with counter-terror Grachonok boats. The depths of the Azov Sea allow for 7 major landing craft of the 97th Brigade of the Russian Black Sea Fleet, 30 small fleet ballistic missile ships and boats, anti-submarine ships and minesweepers of the Black Sea Fleet.

May 4 – FSB border guards detain the Ukrainian fishing vessel YAMK-0041. Criminal proceedings are initiated, followed by an arrest of a vessel in Yeisk and detention of a crew.

May 15 – V. Putin opens the Kerch Bridge, which leads to a 45% reduction in the freight turnover of the Mariupol port, and 30% – of the Berdyansk port.

May 16 – An official opening of the Kerch Bridge.

May 25 – FSB begins to stop and inspect all Ukrainian ships.
Three areas of stopping and inspecting merchant ships in the Sea of Azov and the Kerch Strait.

In July-November, the FSB delays and inspects an average of 100-130 merchant ships per month. In total, 595 ships were detained within five months.

May 30 – Russia closes the shipping area of the Azov Sea, directly adjacent to the Berdyansk port, to conduct exercises. Exercises are not conducted, but the entire traffic flow has to change routes.

June 1 – The 41st brigade of small fleet ballistic missile ships of the Black Sea Fleet begins round the clock patrolling in the Azov Sea.

June 2-4 – The detention of commercial ships by FSB leads to three days without cargo handling in the Mariupol trade port.

June 10 – Grad Sviyazhsk and Velikiy Ustyug missile corvettes, armed with Caliber cruise missiles, arrive from the Caspian flotilla of the Russian Federation in the Sea of Azov. In late 2015, these corvettes fired Caliber missiles in Syria.

August 13 – The number of Russian warships and boats in the Sea of Azov reaches 60.

August 27 – Former commander of the Ukrainian Navy, Vice Admiral S. Haiduk says that in the Sea of Azov, Russia exerts economic pressure on Berdyansk and Mariupol seaports in order to cause social unrest in those cities.

September 11 – The Kremenchug MBAK is transported by land and deployed in launched in Berdyansk.

Mid-September – Ukrainian MBAKs begin escorting merchant ships from Mariupol and Berdyansk to Kerch and back. This immediately affects the activity of the FSB border guards – the number of Russian inspections of merchant vessels decreases.

September 16 – The Ukrainian government announces plans to create a naval base in the Sea of Azov by the end of the year.

September 20 – Official representative of the Ministry of Foreign Affairs of Russia M. Zakharova states that Russia complies with the 2003 Treaty, the waters of the Kerch Strait are called inland waters of both Russia and Ukraine.

October 1 – The number of the Russian fleet units in the Sea of Azov reaches 100. Of these, 36 armed ships and boats, 24 – with artillery weapons.

October 9 – Joint exercises of the Black Sea Fleet and units of the coastal defense brigade of the Army Fleet Corps are held at the Opuk proving ground in Crimea. They involve 3,000 soldiers and more than 200 pieces of equipment.

October 30 – The Syktyvkar and Kizlyar Border Guard Cruisers of Project 10410 (each armed with one 76-mm AK-176M artillery unit, one AK-630M 30-mm artillery unit, two Igla MANPAD launchers) are transferred to the Sea of Azov from the Kola Peninsula along inland rivers.

November 5 – Two Lamantin border guard boats of Project 1496M1 are transferred from Yaroslavl to Azov along the rivers.

November 15 – Russian Foreign Ministry spokeswoman M. Zakharova claims that Russia has annexed the Kerch Strait, unilaterally and unlawfully: “We would like to draw your attention to two vital elements concerning the status of the Kerch Strait and the Sea of Azov. Russia has complete sovereignty over the Kerch Strait as the only coastal state in that region.”

November 15 – Member of the Federation Council F.Klintsevich claims that Russia is capable of blocking “literally within minutes” the Sea of Azov for any Ukraine-flagged vessel.

November 21 – The Russian Foreign Ministry makes a special statement on the unilateral illegal annexation of the Kerch Strait: “The Kerch Strait has never been and is not subject to the United Nations Convention on the Law of the Sea of 1982 (UNCLOS). That is why the requirements on transit or peaceful passage for foreign ships are not applicable to it.”

November 23 – At a press conference in Rome S. Lavrov confirms the unilateral illegal claims of the Kremlin to the Kerch Strait: “I also recall that the Kerch Strait is not subject to international law – it is Russian.”

November 23-26 – Naval battle in the Kerch Strait. 24 Ukrainian sailors were captured, among them three wounded.

November 26 – Representative of the Main Intelligence Directorate of the Ministry of Defense of Ukraine V. Skibitsky briefs on Russia’s recent military buildup along Ukraine’s borders, including the deployment of 500 tactical combat aircraft and 340 army helicopters.

November 27 – Austria, which holds the EU’s presidency, proposes that new sanctions should be imposed on Russia for violating freedom of navigation by the Kremlin. Germany and France reject this proposal.

November 28 – Martial law was introduced for 30 days in 10 regions of Ukraine.

November 29 – The 4th division of the anti-aircraft missile complex C-400 of the Armed Forces of Russia takes up combat duty in Dzhankoy (Crimea).

December 1 – President of Ukraine Petro Poroshenko states that Russia has deployed more than 80,000 troops along Ukraine’s borders in the annexed Crimea and in the territories of Donetsk and Luhansk regions not controlled by Ukraine. The Russian group includes about 1,400 artillery and missile systems, 900 tanks, 2,300 armored fighting vehicles, more than 500 aircraft and 300 helicopters. There are more than 80 Russian warships and 8 submarines in the waters of the Black, Azov and Aegean Seas.

December 2 – D.Peskov states that the Kerch Strait cannot be the subject of negotiations in the Normandy format.

December 4 – The pro-Kremlin mass media begin a disinformation campaign about the alleged “upcoming attack of Ukrainian armored units on Simferopol.”

December 7 – At a press conference in Milan, S. Lavrov explains the futility of the German proposal to deploy the OSCE mission in the Sea of Azov.

December 10 – Speaking in Brussels, H. Maas excludes the possibility of introducing new sanctions against Russia. On the same day, during a telephone conversation with V.Putin, A.Merkel once again proposes to deploy the OSCE mission in the Sea of Azov and the Kerch Strait. Judging by Kremlin’s information about a telephone conversation with Merkel, Putin has rejected this proposal.

December 10 – One of the military leaders of the “DPR” E. Basurin claims that on December 14, Ukrainian side will launch an offensive near Mariupol.

December 13 – Official representative of the Russian Foreign Ministry M. Zakharova claims the Ukrainian side is preparing the alleged “armed provocation on the contact line with the aim of seizing the Azov Sea littoral and entering the border with Russia.”

The most probable direction of the attack of the Russian troops: Skadovsk – Perekop – Chongar – Genichesk.

December 14 – Pro-Kremlin media spread fake news about the allegedly terrorist attack planned by Kyiv in Mariupol with the loss of many lives.

December 19 – Russia is moving military convoys north on the Simferopol-Armyansk highway toward the border between Kherson Oblast’ in Ukraine and Crimea. These convoys include artillery, armored personnel carriers, trucks and a field kitchen. The correspondent of RFE/RL in Crimea observed these convoys moving on December 19 in the village of Pervomayskoye roughly 30 miles from the border with the Ukrainian mainland. ISW cannot assess the sizes of these movements at this time.

December 20 – Russia is increasing its information campaign to frame Ukraine as the military aggressor should Putin decide to invade. Russian officials, including Foreign Minister Sergei Lavrov, the Foreign Ministry spokesperson, and the head of the Russian Foreign Intelligence Service, are continuing to warn about an imminent Ukrainian attack on Russia-backed separatists in Eastern Ukraine and on the Kherson-Crimea Oblast border at the end of December 2018. This propaganda effort could serve multiple purposes. The Russians may be intending fabricate a threat to rally separatist forces to escalate in eastern Ukraine in order to distract from Russia’s main effort north of Crimea. The Kremlin may also be attempting to frame Ukraine as the main aggressor ahead of a Russia-backed provocation in order to obfuscate blame.

December 21 – Unidentified Russian submarines of the Black Sea Fleet conducted planned drills in the Black Sea to practice covert movements while submerged. The crew of one submarine carried out separation from surveillance while the crew of another one maintained surveillance as long as possible. The crews attempted to maneuver as covertly as possible during the submerged position.

December 21 – A Reuters witness spotted a Russian missile frigate 1.5 km off the coast moving from Feodosia towards the Sea of Azov. A helicopter was visible on-board.

December 22 – Russia shifted ‘more than a dozen Su-27 and Su-30 fighter jets’ to Belbek Airbase near Sevastopol, Crimea according to an unidentified ‘Reuters witness.’ The Russian Ministry of Defense had announced on 17 DEC that it would relocate ten Su-27SM and Su-30M2 fighter jets from Krymsk airfield in Krasnodar Territory to the Belbek airfield in Crimea.

December 24 – #Russia continues building up its military forces against #Ukraine & has the capability to go on the offensive imminently. Read @TheStudyofWar new Warning Update: w/ preparations for attack from Crimean Peninsula toward Dnieper River. #NovaKakhovka

December 26 – 23 of 24 Ukrainian sailors, who were captured by the Russians after an attack on Ukrainian military boats, said that they are prisoners of war, – lawyer @nikolai_polozov

December 28 – Russia complains of an impending attack by Ukraine but the Russian military buildup near Ukraine’s border paints a different picture Regardless of Russia’s propaganda the world knows the truth http://euromaidanpress.com/2018/12/28/mar …

December 29 – MOD, Defence Intelligence of Ukraine: “Russia is Preparing to Employ Chemical Weapons in the Occupied Territory of Donbas” http://gur.gov.ua/en/content/rosiia-hotuietsia-zastosuvaty-khimichnu-zbroiu-na-okupovanii-terytorii-donbasu.html …