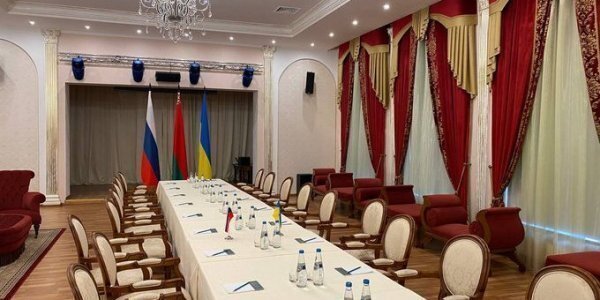 Everyone knows Churchill’s quote: “You were given the choice between war and dishonor. You chose dishonor and you will have war.” It seems that Ukraine is going to break a record, and having no choice, but a full-fledged war, and the war that is far from being lost, wants to voluntarily choose dishonor in addition to this war.

The terms of peace announced by Mykhailo Podoliak, Davyd Arahamiya and Chaly on March 29, 2022 in Istanbul are the de facto terms of our capitulation, for which there is no basis in view of the military situation.

This is a “hybrid” peace that gives Russia everything it needs, except the “maximum” program, i.e. total control over Ukraine.

Instead, Russia receives de facto recognition of the occupation of Crimea and Donbas and guarantees that we will not even try to liberate them, our non-aligned status (i.e. our rejection of the chance to receive protection under the Atlantic Charter), and most importantly, Russia gets the lifting of sanctions.

In turn, the lifting of sanctions means the survival and impunity of the Putin regime, which is already bursting at the seams, and due to the military defeat in Ukraine and the preservation of sanctions is unlikely to last long. Instead, left unpunished, it will return to carrying out its program of gathering together the “lost lands of the Empire.”

The bottom line here is that although an enormous price has been paid in human lives, economical damage, millions of refugees, and destroyed cities, we return to the situation as of February 23, 2022.

And the Russian Federation also returns to the situation as of February 23, 2022 in terms of “punishment” for its aggression. Besides, it gets the opportunity to work quietly on error correction and prepare for a new aggression, during which to implement its “maximum” program,” i.e. the final solution to the Ukrainian question” (c).

So the “peace” they allegedly have agreed on in Istanbul is both morally shameful, military unjustifiable, and apparently suicidal in the medium term.

To allow such peace is the same as voluntarily surrendering to the Putin regime, with all the consequences.

Our real choice is not between a shameful pseudo-peace and war, but between a very difficult but victorious war today, and an even more difficult and likely lost war in the near future. I hope we will not make a mistake in this choice.