Russia is pulling armored groups close to the border with Ukraine: Important facts 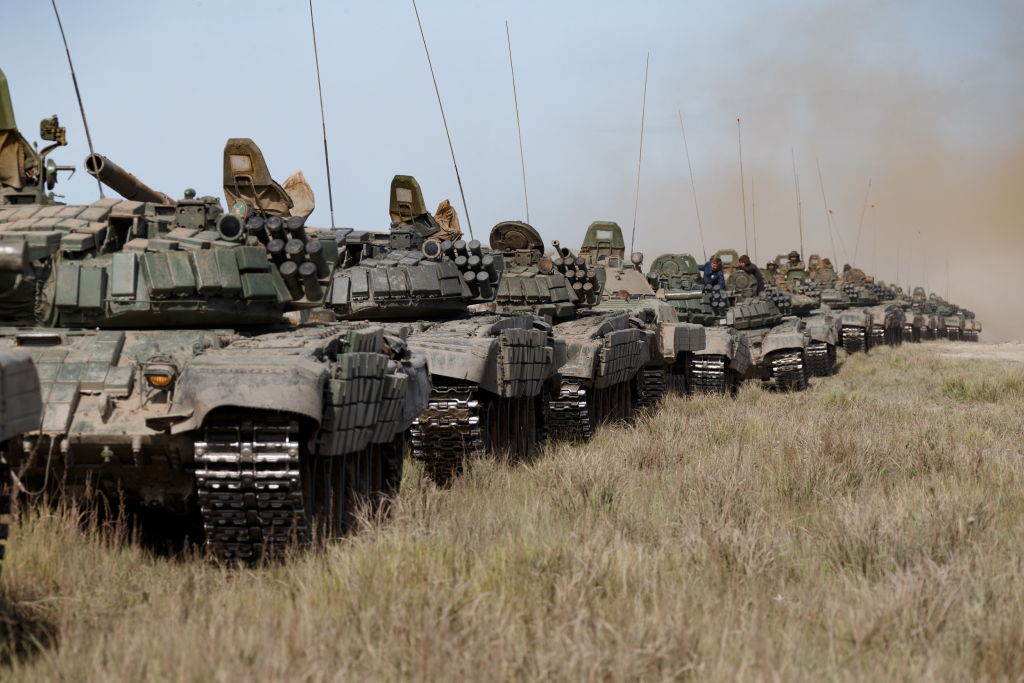 According to InformNapalm analysts, Russia is pulling armored groups close to the border with Ukraine. Here above, some important facts.

On September 19, videos appeared online shot by motorists with their DVRs near the village of Rodionovka in Rostov Region of the Russian Federation.

A large convoy of tanks and armored personnel carriers of the Russian army was spotted moving along the highway only 30 km from the state border with Ukraine.

A certain place on GoogleMap was mentioned on the video. Its present geolocation is 85 km to the East, near the border, but in the vicinity of ​​military training grounds.

This could signal that Russian troops are preparing for an offensive operation. The implications could be especially grave given the nervous reaction of Boris Gryzlov, the Russian envoy in the Donbas trilateral contact group, who claimed that negotiations of the Normandy Four were put under threat, as Ukraine refused to sign the “Steinmeier formula”, which its representatives had allegedly previously agreed to.

It is worth reminding that this formula actually grants Moscow’s objective to consolidate the special status of Donbas and create a buffer zone, which would mean capitulation for Ukraine.

Meanwhile, preparations are being made for the withdrawal of Ukrainian troops along the entire contact line in Donbas.

The Ukrainian side hopes for a ”mirror withdrawal,” which was discussed by  commander of the Ukrainian Joint Forces Volodymyr Kravchenko at a meeting with Osnat Lubrani, the UN coordinator in Ukraine.

However, the contrary signs was seen with Russian troops pulling their armored groups closer to the border.

The deliberate and open movement of Russian armored task groups to the border is an apparent sign of psychological pressure on the leadership of Ukraine to bend Ukraine towards defeatist agreements within the “Steinmeier formula.”

It is also worth noting that Russia has adequate levels of hybrid occupation troops and military equipment in Donbas to escalate the hostilities.

The international community should respond to Russia’s aggressive actions and signals and, as a deterrent, should increase political and economic pressure on the aggressor.

Steinmeier formula is a method of implementing the Package of Measures for the Implementation of the Minsk Agreements proposed by Frank-Walter Steinmeier, who is widely viewed as a pro-Russian influence in the German politics. The essence of the formula consists in immediate granting of temporary special status to the occupied areas of Donbas which are currently not controlled by Ukraine, holding local elections, and then after a report by the OSCE on the outcome of the elections, granting a permanent special status to these territories.

Details and implications of the Steinmeier formula for Ukraine

Elections shall be held in the temporarily occupied areas of Donbas without disarming the militants, without the withdrawal of Russian troops and regaining control of the border by Ukraine.

After the elections, Ukraine shall grant political and economic autonomy to the currently occupied areas for a period of 5 years.

Ukraine shall pay for social programs and restore the damaged and destroyed infrastructure at its own expense.

Ukraine shall announce a full amnesty to all militants.

The militants would receive the status of “people’s militia”, run their own law enforcement agencies; they will not be disarmed during the elections.

Ukrainian volunteers, Donbas war veterans, activists, public and political figures have sharply criticized the perspectives of adopting this “formula” as leading to the surrender of Ukraine. On September 17, they signed an appeal to the President of Ukraine Volodymyr Zelenskyy outlining the “red lines” in the domestic and foreign policy that the authorities should not cross.

On September 19, a protest rally was held in Kyiv with the participants demanding not to sign any “formulas of surrender” for Ukraine. Main slogans of the protest read: “Schwein-Putin formula”, “Crimea and Donbas must return together”, “Normandy conspiracy is high treason.”