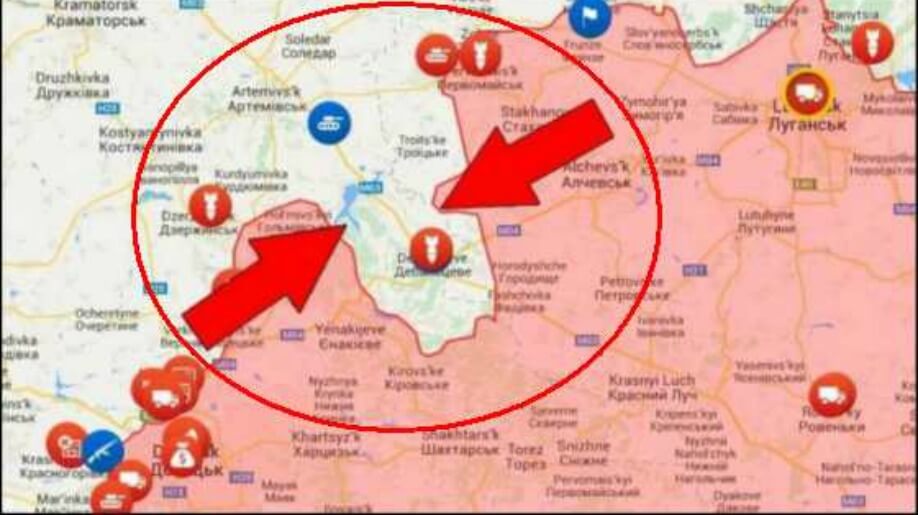 For those EMPR readers who would like to learn more about Ukrainian armed forces withdrawal from the encircled town of Debaltseve in the conflict zone in eastern Ukraine. Yuriy Butusov published a report from one of the “Vega” squadron fighters (part of the Special Forces of the National Guard) who was sent to Debaltseve where he fought in battles and broke out of Debaltseve in the organized withdrawal. This story is differ of those presented by Ukrainian officials. Make your own conclusions.

Ukrainian officer: “The first time we learned about the organized planned withdrawal of the troops we laughed”.

”On February 13th at 20:00 hours an alarm was sounded. It was not because we were being assigned a mission. “The Armed Forces need our help!” was what we were told. Fine. We went. We had twenty men, all great guys, well trained and motivated. There were no briefings about what to expect. We were just told that we were to go to Debaltsevo under the command of the ATO staff. When we got there it became clear that the opponent had control of the road. Intense heavy shelling made it impossible to pass through. Only at night was it possible to get through and only in armored vehicles in bulletproof vests. We entered Debaltseve under fire – the BMP [infantry fighting vehicle] ahead of us was struck. We realized that we were in the thick of shelling and getting out would be hard.

The situation was confusing. There was a lack of clear direction. The first day we just sat in the camp that had been set up by the 128th Brigade. The camp was being shelled with artillery fire without letup. Then we were transferred to Debaltsevo itself. We were tasked with providing cover for the headquarters of Sector “C”. We were there along with several divisions of the Army Special Forces. We had no armored support – we fought as infantry rather than as a special force but unlike regular infantry we were not provided any tanks or BMPs [armored vehicles]. We still had no explanations what we were doing in Debaltseve. Apparently we were there to plug up some holes. It made more sense for us to be utilized in coordinated action with other divisions.

On February 16-17 the enemy made an attempt to seize Debaltseve. They seized practically the whole city. Had Debaltseve been completely taken any kind of withdrawal of any troops would have been unthinkable. Several attempts were made to storm the headquarters [of Sector “C”] – the Russian troops had armored vehicles. The fiercest battle lasted five hours. We repulsed all attacks and the opponent retreated to the train station. We could have advanced further but without armor and with a single rocket propeller beating the enemy is not easy. We were able to resist because we had gone through good combat training and we shot accurately. Plus our teamwork with the Army Special Forces who were right there next to us proved very effective. I am very satisfied with our guys’ performance: they fought nobly and they kept their positions. After the battle on the evening of the 17th the opponent stopped the assault and for a while there was no action in Debaltsevo. Sporadic artillery and mortars kept flying, though. We spent the night in the camp of the 128th Brigade. Suddenly I noticed some kind of commotion. Everyone at the camp was all stirred up but no one seemed to be upset with the proximity of enemy explosions. We were told by an officer of the 128th Brigade that a team had arrived to assist in a breakthrough operation into Artemivsk. We were all supposed to leave. Departure in ten minutes! We rushed to get ready. We had an armored KrAZ [vehicle]. We got everything together and lined up for departure.

Miraculously not a single shell hit the dense mass of people or the weaponry. But we did have to leave behind some of our faulty equipment that would be useless to the enemy.

We didn’t receive any orders on how and where we were to go. There was no established communication system or procedure. It was most infuriating that we were not provided with a map or a route to follow in our retreat. If a route had been provided to each crew prior to departure many losses could have been prevented simply by avoiding the enemy strongholds. The tanks and BMPs rolled ahead of us. We drove several columns of trucks in no particular order and other trucks joined us. As all our machinery moved forward in a huge, crowded and chaotic mass we looked more like a gypsy camp than a military contingent.

Then the column stopped. No one knew where to go. Well, maybe someone did know but I didn’t bump into those who might know. We all knew the location of Artemivsk but no specific route had been designated. When the Russians take control of a road their saboteurs mine the roads. For us, driving at night it was impossible to detect the mines. The Russian tanks stationed around Lohvynovo and other strongholds posed a threat, too. Plus the enemy held all the high-visibility points along both sides of the road. We had to evade all those points and all the settlements the enemy had occupied but an exact route, a route that had been scouted and explored in advance was never provided. It is practically impossible to find the way at night without the presence of a knowledgeable navigator in each vehicle, with the headlights turned off and with no map to guide you. The group commander – the 128th Brigade was in the lead in the breakthrough – gave orders to go off-road to avoid the mines, to stick together and to ‘aim in a northerly direction.’

And so we all drove who-knows-where in almost complete darkness. We all knew about what had happened at Ilovaysk. We knew we had to break out of the enemy’s encirclement which we believed was solid.
Around Lohvynovo the Russian tanks and infantry fired at us. We fired back with all our gun barrels and tanks. We beat the enemy back. They abandoned their positions. We had an opening. Still, we were repeatedly caught in intense shelling. Here and there our shot-through vehicles had to stop and were left behind. It needs to be said that despite the lack of visibility we were able to preserve ourselves and our teamwork. Working vehicles would stop to help the guys who had been shelled and when necessary the guys whose vehicles were ruined were picked up.

Given that we traveled in large groups without light or navigation we were shelled a lot that night. Judging by where the shelling was coming from we realized that we were going in a wrong direction. We had to aim for Artemivsk to get away.

What ultimately saved us is the fact that a great number of the soldiers and officers were very skilled at breakthrough operations. They kept all of us calm and helped everyone. At every turn of aggression we struck back with fire. The consistency and density of our shooting curbed the enemy and we were able to move forward. Generally we utilized our artillery to destroy enemy equipment before shooting. But at night artillery shelling was stopped.

Our KrAZ [armored vehicle] demonstrated a wondrous vitality. The armor saved us when we came under massive fire. Three tires on the rear wheels of the truck were punctured and we kept driving on just the rims. The truck held up for another 5-6 km of off-road driving before it stalled. I blew it up and we were all picked up by our comrades. Eventually the BTR-4 [armored personnel carrier] had to be blown up, too, because its wheels too, got punctured. We tried to tow it but we couldn’t – it was too heavy. Three of my men were picked up by the BMP and all of a sudden it was shelled by a tank. The guys were incredibly lucky – they were thrown to the ground out of the truck and received light injuries.

They got into another truck. I saw that a lot of our trucks were out of order. And it wasn’t entirely enemy shelling that made them unusable. Most of them were technically deficient. Carelessness when driving off-road on rough terrain helped break them, too. There was no time to fix the trucks so we blew them up.
Regrettably, due to a lack of time that was needed to organize everything adequately and because it was so dark I’m afraid that we could have missed those of our men who might have fallen out of the damaged trucks. It’s possible. As a rule we all stopped to help but when the darkness is total, when shelling is ongoing there is no time for an ordered search-and-rescue effort, much less going through the terrain with a fine-tooth comb.

I did not notice heavy losses during the breakout; in fact, the vast majority of our personnel managed to get out. Certainly it was not another Ilovaisk. Had there been proper organization, however, had there been communication and decent management the losses could have been reduced significantly. Had reconnaissance been carried out along our route, had the mines been cleared along the exit route, had our route been well plotted, had we secured the high-visibility points along the route and had we struck hard the centers of resistance the losses would have been minimal. The enemy displayed an unwillingness to fight at night, attacked from the flanks only and failed to demonstrate perseverance in battles. As for us, we didn’t regret using our shells and cartridges and so we were able to outdo them.

We made it. Thankfully because we had good combat training and good military preparation my detachment suffered no casualties and no one was captured. The wounded will be back and ready to go in no time. Other detachments weren’t as lucky.

After our gypsy camp made it to Artemivsk and after we settled in for the night we turned on the internet and read the official announcement in which it was reported that we had retreated along a ‘corridor’ and there had not been a ‘cauldron.’ According to the report we had minimal casualties and the operation had been arranged well in advance and was conducted at a most convenient time.

And there, for the first time in a week we all burst out laughing.”


EMPR, O.R. contributed to this publication.