Home » No panic, get ready for war

No panic, get ready for war 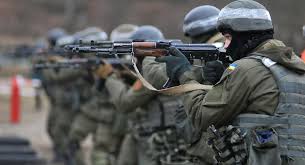 Five years of Russian aggression. Ukrainians have learned what hybrid war is: Russia attacks on all fronts, using various means and methods. However, the possibility of full-scale operations cannot be disregarded either.

What is the current situation?

Representative of the Main Intelligence Directorate of the Ministry of Defense of Ukraine Vadym Skibitsky commented on it in an interview to Obozrevatel.

At the end of last year, martial law was introduced in Ukraine for the first time. It was a shock for a lot of Ukrainians; people were unprepared, despite the annexation of Crimea, the occupation of Donbas and long-lasting hostilities.

We’d rather proceed from November 25, from the developments in the Kerch Strait. Why this happened. First, Russian military buildup near our borders began from the first days of armed aggression against Ukraine in 2014. The process of forming divisions, which now stand at a distance of 15 to 50 kilometers from our border, began.

At the beginning of the aggression against Ukraine, Russian battalion-tactical groups were deployed there. They arrived from different parts of Russia – St. Petersburg, Moscow region, the Central Military District, and the Eastern Military District. They entered our territory, conducted warfare, rotated in due time. Some remained near our borders, but that was not a permanent basis.

And when Russia lost its strategic initiative at first stage and was stopped, then it decided to deploy new divisions, new troops near our borders on a permanent basis. That process started in 2015.

They began to redeploy brigades from the Central and Western Military Districts of the Russian Federation to our border. At first they lived in field camps. There was accumulation of military-grade hardware. And in 2016- 2017 they started active infrastructure construction: barracks, headquarters, and proving grounds, including residential buildings for officers. And by December 2018, they achieved operational readiness.

How can you explain the December activity?

There was militarization not only of our occupied territories, but, actually, the whole European part of Russia. Everything was gradually accumulating, accumulating…

And now we can no longer say that Russia needs some time to prepare large-scale operations against Ukraine. Russian troops are at our border. Just 15-50 kilometers – it takes a day – and they will be in our territory.

And armed aggression against our ships demonstrated readiness of the Russian Federation.

Russia fully controls the Azov Sea and can close the Kerch Strait at any moment and allow the passage of only those ships they want. Actually, the blockade of the Azov Sea is an accomplished fact.

One of Russia’s tasks (and this was clearly seen in 2014, at the very beginning of the aggression) is depriving Ukraine of an access to the world’s ocean, a complete blockade of our coast. Both the Sea of Azov and the Black Sea. Crimea was only the first stage.

Then – the project “Novorossia”, which envisaged the seizure of the territory of Ukraine from Kharkiv to Odesa. This is the plan that Russia is now trying to implement, but through a hybrid, “creeping” method.

But do they understand? Sanctions, then the second, the third … If guided by pure logic (if there are actions, there are consequences), all should have ended long ago.

They understand the consequences perfectly and adjust their actions. The first adjustment, according to our estimates, took place in May 2014. Initially, the Novorossia project was furthered, and then there was Odesa. And after that the Russian intelligence services were forced to change their original plan. There was a creeping aggression involving pro-Russian elements, the fifth column … There were events in Donetsk and Luhansk… Then and now, we do not exclude the possibility that they may correct their plans and use hybrid approaches.

For example, the economic projects promoted by the Russian Federation in the Black Sea. Russians have been managing the three of our gas deposits captured by them after the annexation of Crimea.

Currently, at least one of the Black Sea Fleet warships is defending these drilling platforms. And their “protection” may be strengthened any minute.

Among other infrastructure projects of the Russian Federation, except for the bridge, is laying a gas pipeline. And this can also be the reason for strengthening their presence, closing any area by Russia, and carrying out certain actions.

We will talk about the information war and the reaction of the world community a little later, and now let’s go back to the reaction of Ukrainians to the reported data on the possibility of large-scale actions.

As to panic. Reported data are a realistic assessment of the existing threats rather than an intimidation. And this threat is described in the strategy of national security.

Speaking about military doctrine, it clearly states: today the actual threat to our national security is the strengthening of the group of Russian troops near our border.

If this strengthening takes place, accordingly, the level of threat increases.

As of today: how does military intelligence assess the level of threat?

It is high. It testifies that the Russian Federation, with the available force grouping and in its readiness, is capable of carrying out large-scale offensive operations. Ukraine is responding to this threat in all possible ways.

Our history shows that we have always faced problems from our neighbors. We warned about the presence of a Russian military base in Crimea, its full combat readiness and active preparation for certain actions on the Crimean peninsula. Unfortunately, we failed to solve this problem until 2017, as planned, when the agreement on the Black Sea Fleet of the Russian Navy in Crimea expired. Russia’s aggression began.

Today the Crimean peninsula is like an unsinkable aircraft carrier. It plays its role. The same functions as in the days of the Soviet Union.

Unsinkable, but with big problems. For the population.

For Russia, the main task is the bases and the coast. However, it does not care about the problems of the rest of Crimea, population, infrastructure and agriculture.

Nevertheless, Crimea is called Putin’s favorite toy. This fact is recognized by his close associates. And this “toy” has an acute problem with water, which can become a reason for more aggressive actions of the Russian Federation. In December, it was announced that in case of full-scale aggression of Russia in Luhansk region, 83 settlements, in which 130 thousand people live, may be under fire. But there are also Mykolayiv and Kherson regions.

Everyone should be ready for war. Even if the state of war with Russia is not announced, de facto armed hybrid aggression continues, and it does not stop.

Remember the combat training conducted by the Russian army in early December. Then an airborne assault force was dropped near Dzhankoy. You understand that it is not difficult to fly, for example, 15 kilometers more and drop it in Kherson region.

The goal is actually one — our infrastructure and strategically important facilities. This perspective applies, in particular, to the Kakhovka Reservoir, the energy supply system, and, in general, life support of Crimea. These are the priority targets in case of large-scale aggressive actions of Russia. This must be said loud and clear.