Home Politics Their lie is humiliating: banner with Zelensky and Yermak unfurled on the Maidan

Their lie is humiliating: banner with Zelensky and Yermak unfurled on the Maidan 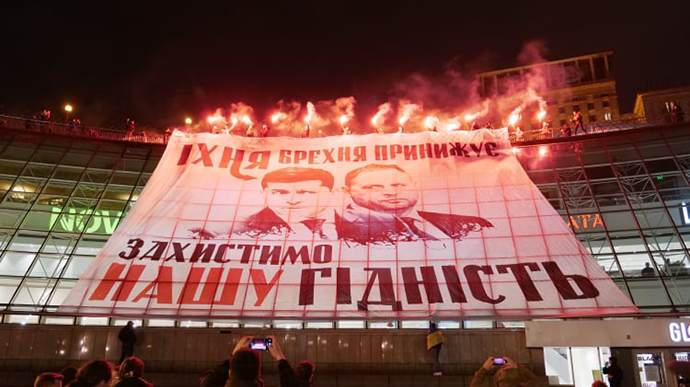 On Sunday evening, activists unfurled a banner addressed to President Volodymyr Zelensky and Head of the Presidential Office, Andriy Yermak, on Maidan Nezalezhnosti.

The banner “Their lie is humiliating. Let’s protect our dignity” was unfurled on the facade of the “Globus”.

However, 20 minutes later the banner on the “Globus” was torn in half by the wind.

Several thousand people have come to Maidan Nezalezhnosti that day to celebrate the Day of Dignity and Freedom, and to commemorate those killed during the Revolution of Dignity.

A large column of people with flowers and Ukrainian flags stretches along the Alley of the Heavenly Hundred Heroes. People honor the memory of the dead.

Later, a column of people came to the chapel on the Alley of the Heavenly Hundred Heroes for an interdenominational memorial service for those killed during the Revolution of Dignity.

On the Day of Dignity and Freedom, citizens had to defend themselves from the police. On November 21, after a march in honor of the heroes of the Heavenly Hundred, activists went to the Presidential Office.

Police behaved like a real “Berkut” (golden eagle) and did not let citizens behind the gates, illegally demanding to turn out their pockets and bags. People did not put up with such humiliation, especially on the anniversary of the beginning of the Revolution of Dignity. The police provoked congestion, but the activists held back their pressure and persevered.

This event clearly showed that we need to strengthen our self-organization. Therefore, a resumption of Self-Defense was announced on the spot.

Another demand was that Zelensky must release Andriy Yermak by December 1. Or the head of the OP himself must resign. The rally protesters admitted that Yermak is a Russian agent who is usurping power in the country. His place is in behind the bars, not in the government.

On November 15, 2021, the Temporary Commission of Inquiry of the Verkhovna Rada issued an interim report, according to which President Volodymyr Zelensky did not cancel the special operation to detain the Wagnerians, and the head of the President’s Office Andriy Yermak has no authority to do so.

On November 17, Bellingcat and The Insider published an investigation into the high-profile case, in which Vasyl Burba, former head of the Central Intelligence Agency, explained that Andriy Yermak had proposed postponing a special operation on the Wagnerians for a week so as not to disrupt the Donbas ceasefire agreement with Russia.

On November 19, Vasyl Burba, former head of the Central Intelligence Agency, confirmed that Yermak had instructed, on behalf of Zelensky, to postpone a special operation against the Wagnerians.

That was about an operation to detain the Russian private military company “Wagner” fighters involved, in particular, in the downing of Ukrainian planes in Donbas. At the end of July 2020, the Wagnerians were detained in Belarus.

According to the UT sources, the militants were to fall into a trap – it was supposed to land a plane with mercenaries in Ukraine, and then detain them. However, the operation failed. This happened after a meeting in the President’s Office. The reason for the failure could be that the information about the plans of the special services was “leaked”.

It turns out that the president and his chain of command have been defended to society for almost a year, whereas those exposing this lie have almost been accused of high treason and humiliated.