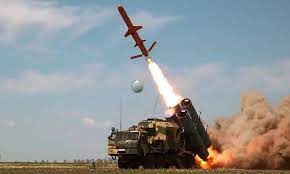 Plans for further production of ATGM Stugna, Corsair and anti-ship cruise missile Neptune were discussed at the office of the National Association of the Defense Industry of Ukraine

The office of the National Association of the Defense Industry of Ukraine hosted a working meeting between the chairman of the association Serhiy Pashinsky and the general director of the Kyiv State Design Bureau “Luch” Oleh Korostyliov.

This was reported by the press service of the “National Association of Defense Industry of Ukraine”.

The parties noted the high combat effectiveness of anti-tank and anti-ship missile systems manufactured by “Luch” in cooperation with domestic state and private enterprises of the defense-industrial complex of Ukraine.

The availability of modern domestic means of destruction, the level of readiness and training of units of the Defense Forces for their immediate use played a decisive role in repelling and deterring a large-scale attack by the Russian Federation on the territory of our country in February 2022.

Currently, even in the presence of various foreign analogues of anti-tank weapons in Ukraine, the Stugna and Corsair anti-tank missile systems retain their central place in the state’s anti-tank defense system.

Successful and unique strikes of the Neptune anti-ship missile system, carried out in adverse weather conditions with active electronic countermeasures, proved to the world the high capability of Ukrainian-made weapons in combat with the latest models created and containing Soviet and Russian production technologies.

The parties noted the need for further dynamic development of the country’s defense industry as one of the main elements of military and economic security of the state.