Zelenskiy’s “digital state”: from business to blockchain for voting 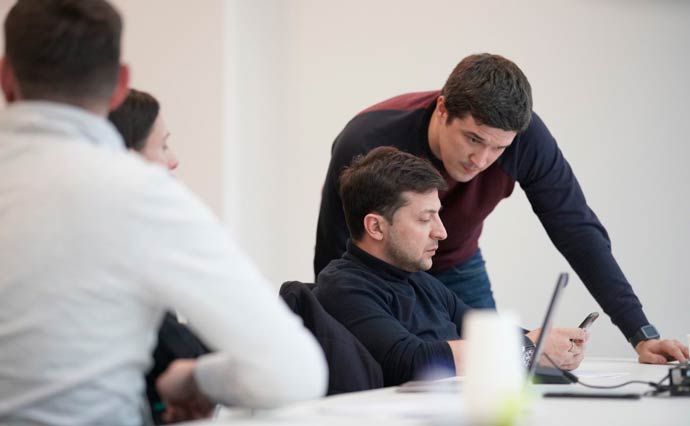 Mykhailo Fedorov, the director of Vladimir Zelenskiy’s digital campaign, is dreaming to develop a “digital state” so that current processes can be carried out without papers and queuing.

He spoke about such plans of the Zelenskiy’s team in his interview to “Hromadske.”

“I do not need any positions. I have my own business. There are a lot of companies that I am involved in, digital agencies. There is a responsibility. So, I have to think about what to do with it, how to properly transform it,” Fedorov said.

“But I know exactly that the things we have named, i.e. the “state on the smartphone,” will be definitely implemented, not matter which role I will have,” he added.

“During this time, we have developed with experts the concept of the development of a digital state. From the digitization of one project as a pilot one to the introduction of blockchain for voting. From small projects to large ones. This is a clear document. In principle, we have a clear document for each area. Each document consists of 10 to 100 pages,” said Fedorov.

His answer to the question concerning basic state services in the smartphone in the near future was as follows: “I would start with business. For example, opening/closing a company in two clicks. Then will necessarily follow medicine, education and the election process.”

“What annoys me most is a procedure of receiving a certificate of criminal record or certificate of household composition. These are basic things that do not require a lot of money, time and all that. You are standing in the queue for 4-8 hours,” Fedorov admitted.

“My dream is to work with an ID card. To move to ID cards, to remove paperwork that proves you have an ID card,” he said.

Fedorov also said that they “had spent about 200 thousand dollars for the entire campaign in 4 months on FB, Instagram, Google, Youtube.”

We did not recruit any bots, but involved almost 600,000 volunteers for the projects “Ze!digital,” “Ze Book”, “Ze people”.

“I can definitely say that there is no strategy to accumulate these people and to keep trying to win parliamentary elections with them. Now we need to work with these people on developing a system that will allow new people to enter the state system and change everything,” Fedorov said.

“If I continue to work on the project, this is exactly what I will do. My mission will probably be to open a social lift,” said the digitalization specialist.