Home » How Zelensky concentrates power or the Presidential-Bohdan Republic

How Zelensky concentrates power or the Presidential-Bohdan Republic 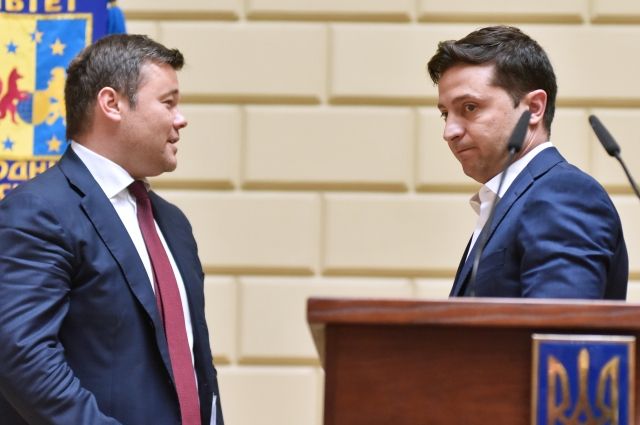 The way President Volodymyr Zelensky has concentrated power in his hands is unprecedented in Ukraine’s history.

His power is so great that members of his own faction, who voted for the parliamentary immunity  two weeks ago, are now afraid to remain face to face with the General Prosecutor’s Office of Ukraine, and some political opponents whisper that a new post-Soviet dictator was born. This seems a huge exaggeration. However, the distribution of power in Zelensky’s times gives reason to speak about an unannounced change in the form of government.

Ukrayinska Pravda tries to figure out if Ukraine is really on the verge of autocracy.

The rise of Zelensky

Before the second round of the presidential election, when the prospect of Petro Poroshenko’s loss  began to shape quite clearly, conversations under a conventional name “Yushchenko-2” were popular with the MPs.

It was implied that an amateur politician Volodymyr Zelensky would soon show his helplessness, and his rating would have been completely destroyed by the autumn parliamentary election.

Against this background, the Parliament, on the contrary, was supposed to increase its influence, so that the country would gradually turn from a parliamentary-presidential republic into a parliamentary one.

This “forecast” was made by numerous MPs of different political weight and experience: from speakers of the factions to oligarchs who owned those factions.

At the time, it seemed quite realistic. It was predicted that as soon as Poroshenko stepped down from power and his rigid pressure disappeared, the Parliament would seize the reins of government.

Like, while Zelensky learns to write decrees, the Parliament will deprive him of the powers not provided by the Constitution that were concentrated by Poroshenko.

For example, forming the composition of the National Commission on Energy and Utilities, appointing leaders of NABU and the State Bureau of Investigation.

President Zelensky was expected to have no choice but become sort of Queen of England.

This plan did not take into account two important details.

Firstly, explosion of popular support for Volodymyr Zelensky, as well as his ambitions. In his first official speech  Zelensky declared that he was disbanding the Verkhovna Rada, the same Rada that had threatened to “eat him until the fall.”

Secondly, no one took into account the presence of “turbo boost” – Аndriy Bohdan.

Before Zelensky was elected President, all the old politicians pegged Bohdan only as оligarch Іhor Kolomoysky’s lawyer. Nobody wanted to figure out what kind of person he was and what he could do.

It’s their loss! Because after the presidential election, “porokhobots” had no other choice but to watch Kolomoysky’s lawyer turn into the architect of the Zelensky’s regime and Ze himself seize more and more horizons of power with lightning speed.

But it is important to understand what country Zelensky is going to build and what we all should do with his almost unlimited power.

Sometimes it seems that the word “president” is not enough for Volodymyr Zelensky. At least, the current level of his influence and power runs counter to the president’s description in the Constitution of Ukraine.

For example, how was the cabinet named? A good half of the “Servant of the People” faction did not know even the Prime Minister’s name before the vote, let alone the names of the Cabinet of Ministers.

For the first time in history, the Verkhovna Rada has a token role.

Indeed, under other presidents and Constitutions, the president influenced the choice of prime minister and key ministers. The “presidential quota” was always the main one. However, it was one of several and not one-and-only.

This time, each and every decision was made by the President.

The specificity of the work of Zelensky and his team, with its mono-majority in the Rada, has already come into the public domain and is called a “green printer.”

During the first weeks of the new parliament’s work, Bankova forced its majority to vote in favor of the bills that many MPs never saw.

The committee meetings are held in short breaks between work under the dome. And during the half an hour that the servants of the people have to approve the bills, they only have time to reject all amendments in the committees (it is faster), and submit the bills to the parliamentary chamber.

For the first time in history, the country is faced with a situation in which one person (President Volodymyr Zelensky) entrenches in his hands two separate and independent branches of power – legislative and executive.

Thus, the new power is essentially built as a leader one, not to say autocratic.

Where Poroshenko had to maneuver, seek partners and allies in the country to make or fail any decision, it is enough for Zelensky to say “yes” or “no.”

He not only symbolically represents the Ukrainian authorities, he is their real embodiment.