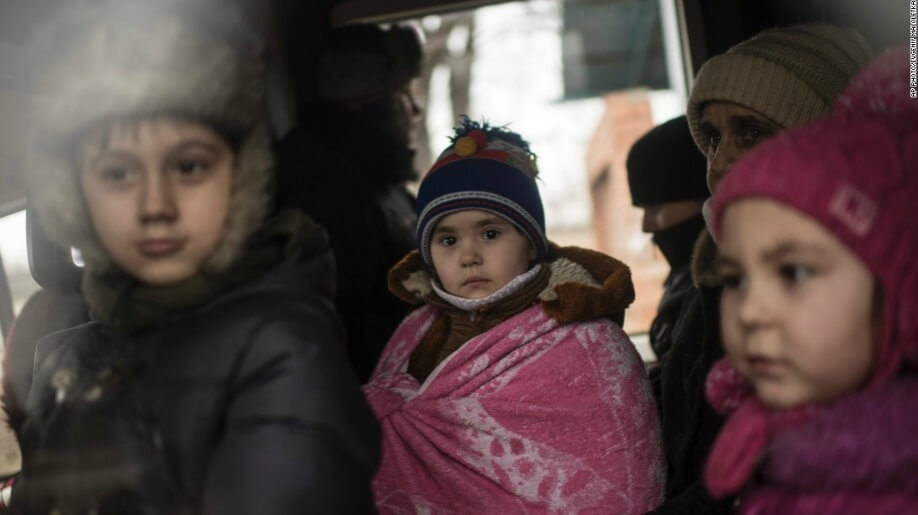 In these difficult times for Ukraine, IDPs from the conflict zone in eastern Ukraine have high hopes that their government will make wise and focused decisions. All too often, though, laws are being enacted that are unwise and confusing.

The laws that were passed recently in regard to internally displaced persons have not stood up to scrutiny, neither from a legal standpoint nor from a standpoint of logic. Tatiana Matiash, a human rights activist and herself a displaced person, has agreed to comment on these issues.

Tatiana Matiash is an active participant in the United Ukraine movement she continues her rights advocacy. She has moved to Kyiv where she is involved in developing guidelines and a procedure for providing aid to the displaced persons through the Ministry of Social Policy.

Tatiana, the Cabinet of Ministers has recently adopted a resolution that will require the IDPs to obtain a stamp from the immigration services. How does the ruling violate the rights of internally displaced persons? It is believed that this decision will help solve the problem of “tourists” coming from the “conflict zone,” including the elderly pensioners. What kind of solution do you envision for that problem?

First of all, there is nothing illegal in that. People are free to travel. There has not been an official declaration of war in our country. And secondly, the problem of providing pensions should be considered completely separately from the refugee problem.

Recently the SFS [State Fiscal Services] has issued a statement that the displaced persons are required to pay taxes on their real estate in the conflict zone. Logically that is absurd since the people who have fled have lost everything, so how can they be expected to pay a tax on something they no longer own? How should that be determined legally? The people who have fled the “conflict zone” don’t own real estate because to be an owner of property three criteria have to be met: the right to use the property, the right of ownership, and the right to dispose of it. This is the basis of the Civil Code. The government is supposed to guarantee those rights. It is the government’s fault that we have lost the right to use our property, the right to dispose of it, and the right of ownership; I don’t fit a single criterion of ownership. And if I don’t fit any of the criteria of ownership then I do not own anything. And if I don’t own anything, how can I pay taxes just because I own the document – the document relating to my former ownership is the only thing I have left.

And there are no extra quadrants in the document – the documents take up less than 60 squares. Taxes must be paid but there is no property.

They have no right to demand payment, only if there is ownership of property can payment be demanded, and as of current conditions we don’t own anything, thanks to the government that has failed us in protecting our property. According to the Civil Code the government is legally responsible to protect citizens’ private property.

How are similar problems resolved in Europe, problems of internally displaced persons and their rights of ownership?

Europe has no annexed territories or territories that are occupied or “separatist.” In Europe such issues are resolved peacefully and even though it can take a very long time to come to a resolution, a resolution is arrived at legally. Take Scotland, for example, it took ten years to prepare and conduct a referendum and when the outcome of the referendum was negative it was accepted completely peacefully. Scotland did not win its independence even though they had worked for it for ten years – still, they did not resort to using weapons and of course they weren’t invaded by the “Russian World.” But that’s what happened to us: we were invaded by the “Russian World.” So our situation is quite complicated. We have to resolve many issues on our own. We cannot compare ourselves to Transnistria, Abkhazia or Ossetia because we all have different problems, we all find ourselves in different situations plus the scale or our displacement problem is massive. Nowhere has there been such a huge number of people who a) have already fled, and actually, when you compare numbers in area and in people the equivalent of two Transnistrias leave already fled from eastern Ukraine, and b) who still need to be evacuated and saved.

Among the existing international laws that guarantee internally displaced persons with housing and employment, which of the laws is being observed in Ukraine?

Under international law an internally displaced person is considered to be a subject of the country the person lives in, and in our case, Ukrainian citizens are protected by the laws and government of Ukraine. As citizens of Ukraine, and as persons who have been displaced within Ukraine they are subjects of Ukraine, and Ukraine must develop her own methods and approaches to the problem, and the international bodies can step in to help if and when they are asked.

Are there avenues people can pursue for the reparation of lost property in the conflict zone?

There are. Firstly, it is imperative to establish a clear legal status, approved by international organizations. There is a way to get compensation at Russia’s expense.

Currently there are a lot of public organizations and advocacy groups of displaced persons with proposals on how land allotments can be apportioned for the construction of housing for the IDPs. Ukraine’s legislation provides for such a right but how realistic is all of this?

Before it was practically impossible. The amount you needed to spend just to draw up a document for the right to own a plot of land amounted to almost $10,000. In addition to which you were required to specify a particular plot of land with proof that absolutely no other person has a right to that land.

How do you envision all those problems related to the arrival of so many displaced persons can be resolved?

First of all, we must not get hysterical. Then we must accept the fact that this is a serious, long-term problem, and based on that ideas need to be developed. It is important to create a climate favorable to investments, to create jobs, and once those prerequisites are in place things will start to progress and improve on their own. Living standards will go up. In principle, the population density we have is not greater than what Europe has and in principle where to place these people is not a problem. And as far as land goes, there is plenty of land to invest in, there just needs to be a comprehensive program. For the time being our government is in panic mode and is tackling the problem using one approach and then another. What is interesting is that the people are not hysterical. People have simply taken it upon themselves, they have channeled their energy and are doing things on their own. People are trying to solve their own problems but sadly the government has not come up with any way to facilitate this work for the people, there are no regulations to help this development. Even international organizations have offered aid programs for Ukraine’s predicament. The Ukrainian government is working out its own concept but it is still a sketchy, unrefined model.

I propose a change to Article 1 in the legislation concerning the internally displaced persons – everything favors the elderly, those who receive pensions, and that is a huge stumbling block. I propose that the displaced be treated separately from the pensioners, though both groups need protection. And there should be no question whether they are good or bad people, for that there is the criminal code, and if criminal proceedings are called for they should be instituted against individuals and not against everyone from the Donetsk region. We tend to divide people according to where they’re from – if they are from Donetsk (Crimea, Luhansk) we judge them as separatists, etc. That’s not right. It leads to people feeling ashamed of where they’re from. It adds unnecessary complications to their already serious psychological problems because they are displaced persons. This is something the government should take on – the government should create a positive image, an image of a valuable individual, an integrated citizen of a united Ukraine. Original version in Russian is available on empr.media/ru