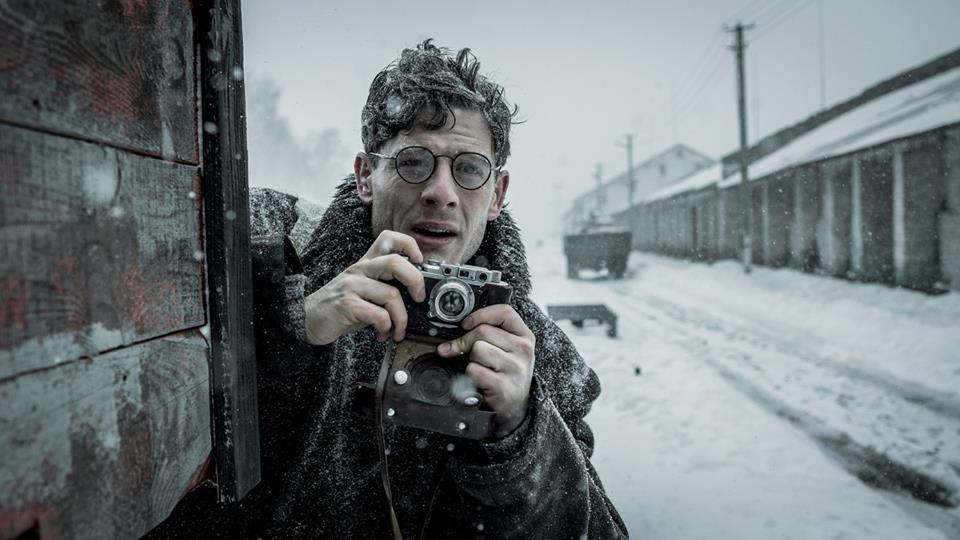 Ahead of the film’s world premiere at the Berlinale, the U.S. magazine “Variety” released a never-before-seen excerpt of the film “Mr. Jones” directed by Agnieszka Holland.

The film co-produced by Poland, the UK and Ukraine is based on real-life story of a young Welsh journalist Gareth Jones trying to tell the world about Holodomor – Stalin-orchestrated famine he witnessed in Soviet Ukraine in 1933. “Mr. Jones” runs in the official competition of the 69th Berlin International Film Festival.

The Welsh journalist was one of the first to speak about the mass starvation in Ukraine in the western media. Radio Liberty asked the film director Agnieszka Holland about the film as well as why she sees the threats that today’s world is facing similar to the ones portrayed by the film.

EMPR publishes an abbreviated excerpt of the interview translated from Ukrainian.

Agnieszka Holland: I learnt about Gareth Jones from the U.S. journalist, writer and the screenwriter of our future film Andrea Chalupa. She is a second-generation Ukrainian in the U.S., she has been researching Holodomor, the tragedy that also touched her family – her grandfather was a Holodomor survivor. (…)

Andrea came across the diaries of Gareth Jones, and so she had an idea to unite them with George Orwell’s “Animal Farm” – the novel largely inspired by the events Jones was describing.

Radio Liberty: Why did you decide to take part in this project?

A.H.: The screenplay attracted me with its out-of-the-ordinary take and with how important for the present it is. In addition to Holodomor that is the film’s central theme, there’s also the theme of “fake news”, spreading of the “alternative reality”, corrupt media, journalists’ responsibility and government’s co-responsibility for the lie. And that’s what is very much similar to our time. The film is about the fatal danger of lies. I was impressed by the figure of a young brave journalist who did not fear to disclose the communist crimes.

R.L.: While Gareth Jones was uncovering the crimes of the communist regime in the USSR, another journalist, a much more known and influential one – Walter Duranty, a New York Times correspondent in Moscow, was trying to hide and justify these crimes, make them unimportant for the western readership. Jones, killed in Manchukuo at the age of 30, remained forgotten for many years, while Duranty was awarded the Pulitzer Prize, lived quite a long and prosperous life.

A.H.: It was exactly that Duranty was ridiculing the young and unknown journalist from the position of a well-known reporter that helped hide the crime of killing the millions.

R.L.: Eighty five years after Holodomor stays a very sensitive political issue. Anne Applebaum, the author of a recently-published book on Holodomor, came under sharp criticism in the West due to her pro-Ukrainian position, while to many Ukrainians her position was not pro-Ukrainian enough, as she did not call Holodomor genocide. Are you ready to have your film criticized in a similar way?

A.H.: I read the book and I am familiar with these discussions. (…) Holodomor is a horrible crime. It was targeted at Ukrainians in the first place, who were mostly peasants. But there were people dying from starvation in Russia as well.

In Ukraine the consequences of Holodomor were much more horrific. Even a mere thought of independence was suppressed for many decades. It was a crime against humanity, a crime that they were trying to hide. (…) Fear that was planted back then, was growing over decades supported by the authorities, talking about the famine was considered a crime, a libel against the Soviet authorities.

On the other hand we do not have a Stalin-signed paper ordering to eliminate Ukrainians as Ukrainians. I know that historians and economists were looking for the document but have not found it.

Ukrainians have built much of their national identity around Holodomor. It is similar to Israel where the corner stone of their national state is Holocaust. So I can understand that it is a very painful issue for Ukrainians. For historians it is also difficult to be looking at this event from various angles trying to unite the Ukrainian and the Russian perspective. I was not even trying to do so. To me it was important to look into the story, see it with the eyes of one person and describe his experience.

“Mr. Jones” world premieres at Berlinale Palast on February 10 at 22:00. At the Berlinale it will go on screen four more times, details here.

Agnieszka Holland has made more than 30 films, winning the Golden Globe and Silver Berlin Bear, and being nominated for a BAFTA and an Emmy. Her films “In Darkness,” “Europa Europa” and “Angry Harvest” were all nominated for an Oscar, “Variety” lists.