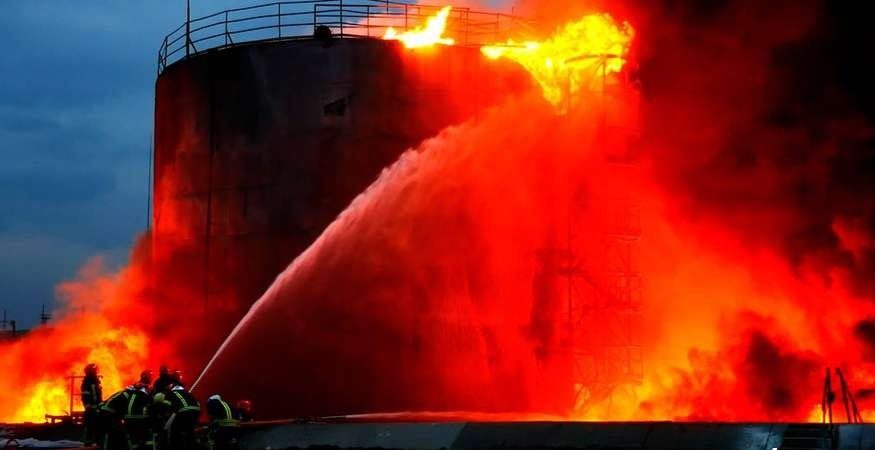 Among the latest targets of the Russian enemy are the oil depots storing fuel for agriculture purposes. The enemy shelled three of them in Western Ukraine during the last few days in Lviv, Dubno, Lutsk. Among directions, missiles were coming from Belarus (north direction) and Sevastopol (occupied Crimea). It is about food security, not in Ukraine, but globally.

Yuri Romanenko voiced the following version why it might happen.

‘Friends whisper that there is no OKKO anymore.

They say that the missile attack near Lviv targeted the plant and the oil depot on March 26.

They destroy the fuel storage and production sites.

And before that, they destroyed the KLO oil depots in Vasylkiv (both two)and Kalynivka (near Brovary), as well as fired at a small oil depot (former ‘Golden Cheetah;) near Obukhiv, Kyiv Region.

Well, some explain this by the fact that Russia has prepared for war for the past 8 years, has equipped the troops and all that.

But how did Russia find out the addresses of oil depots?

And then I realized…through the Tax Service of Ukraine!

For 8 years, they have clearly bribed their lobbyists from amongst politicians and thus the needed laws have been adopted with the help of these lobbyists.

For example, the laws on excise fuel depots providing for all fuel tanks to be equipped with level gauges showing the real-time fuel influx and consumption.

3,400 fuel depots, according to the Tax service.

Data on the exact location, storage volume, GPS address of the tank level gauges were entered into their  tax tables with extreme accuracy.

And if they prepared for 8 years, then they made the life of Ukrainians impossible through the same lobbying.

Who proposed designating oil depots as an excise fuel warehouses? Isn’t he an enemy?

Because missiles are flying using GPS coordinates of the fuel gauges. How do they know where.

And that very CEA VAT, the only one in the world that nightmarized 33 percent of the country’s enterprises and provoked closure of 10 percent of them last year. And the year before that, the same amount by the way.

And as I understand it, some are still in power there, write laws, continue to harm the country.

How to get rid of such an internal enemy, who has immunity, but harms the whole country with his Laws?’

Many sources now saying that Russia is clearly trying to disrupt the sowing campaign. But this is already too obvious due to the attacks on oil depots.

Yuri Romanenko and others think that Member of Parliament and head of the Committee of the Verkhovna Rada of Ukraine for the provision of finance, taxation and peace policy Danylo Getmantsev made it easy to leak all the coordinates of fuel depots as he initiated a mandatory entering the GPS address of the level gauges into the tax reporting tables, sources say.

Now the invaders are targeting the depots filled-up with fuel. And they clearly know about it.

Getmantsev’s activities require the most in-depth consideration of law enforcement agencies. Because what he did in the economy looks like a deliberate subversive policy in favor of Russia, author believes.